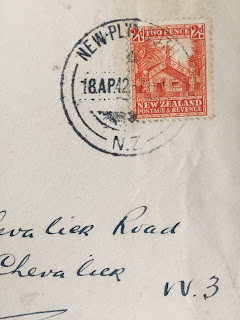 How to read a letter.

Or rather how to get as much information as possible from an old letter.

The date stamp is crucial. All stamps were 'franked' which means a legible outline was stamped in black ink over the existing stamp with the whereabouts the letter was being posted from and the date, including the year. The stamp also gives information wider than itself. In this case the letter is franked 16 April 1942, New Plymouth, NZ.  The stamp is of a Maori whare (house) and is finely etched.
In 1940 it was one hundred years after the signing of the Treaty of Waitangi. New Zealand effectively dates itself from February 1840 when the Treaty was signed between Maori and Queen Victoria.
In 1940 there was a celebration of New Zealand being one hundred years old. Hence the picture of a Maori house: it evoked the early world of New Zealand, its 'authentic' origins. But it was also made 'antique' by being so finely etched. This meant it belonged in another world. It was not strictly speaking contemporary.

But there was a problem in 1940. The world had erupted into global war. New Zealand as a British Dominion as it was called - this means an independent state that was in the British Empire - sent troops to Europe and the Middle East to fight for what was conceived as 'the motherland' - Britain.
This was partly because most New Zealanders of European descent were originally from Britain and Ireland. They were part of one of the great tidal movements of people in the 19th century, when the Anglophone world (people who speak English) spread out all around the globe in a desperate hope of making a better life than that in an overpopulated industrial Britain - or famine-struck Ireland. In some ways it was not unlike the great movements of population today.

But one hundred years on New Zealand sent its army to Europe to fight. It was relying on British imperial power to protect it, especially from Japanese fascism. However the British army had the most resounding defeat in its history in 1942 when the British army surrendered without a battle to the Japanese in Singapore.

This is popularly considered the date that the British Empire, in effect, ended. It left New Zealand and Australia undefended. Their armies were away from home. One could call it an hallucination arising from displacement, but at the time it seemed more important that Britain was saved than New Zealand.

New Zealanders got a rude awakening in 1942 when the Japanese air force bombed Darwin in Australia, sinking 11 ships and killing 235 people. Japanese submarines sank a ferry in Sydney Harbour. Waves of panic swept through Australia and New Zealand as people realised they were essentially undefended.

So that is the back story behind this date, and that stamp.

The letter was sent by my mother's elder sister to her in Auckland, recommending that she abandon Auckland and try and get down to New Plymouth, a rural area on the West Coast. There she had friends who had a farm. The idea was she would be safer there.

As it was the Americans entered the war after the Japanese bombed Pearl Harbour. The Americans came to New Zealand which became a base for the war in the Pacific.

Many women's lives were changed forever when they met American servicemen. To many of the women the men seemed to have stepped out of a film and into their lives. They were used to New Zealand men who were awkward and little given to social polish.

So while this appears a very simple stamp, with a clear franking on it, there is a story to be told if you delve just below the surface. Dates are not neutral things, especially in terms of people communicating to one another. When horrible things happen friends get in touch with friends, family members reach out to family members. In this sense a date becomes like a lynchpin joining everyone together.

So that is the story behind this very simple image.
Posted by Peter Wells at 8:49 PM