Launch of 'Journey to a Hanging' with associated media links 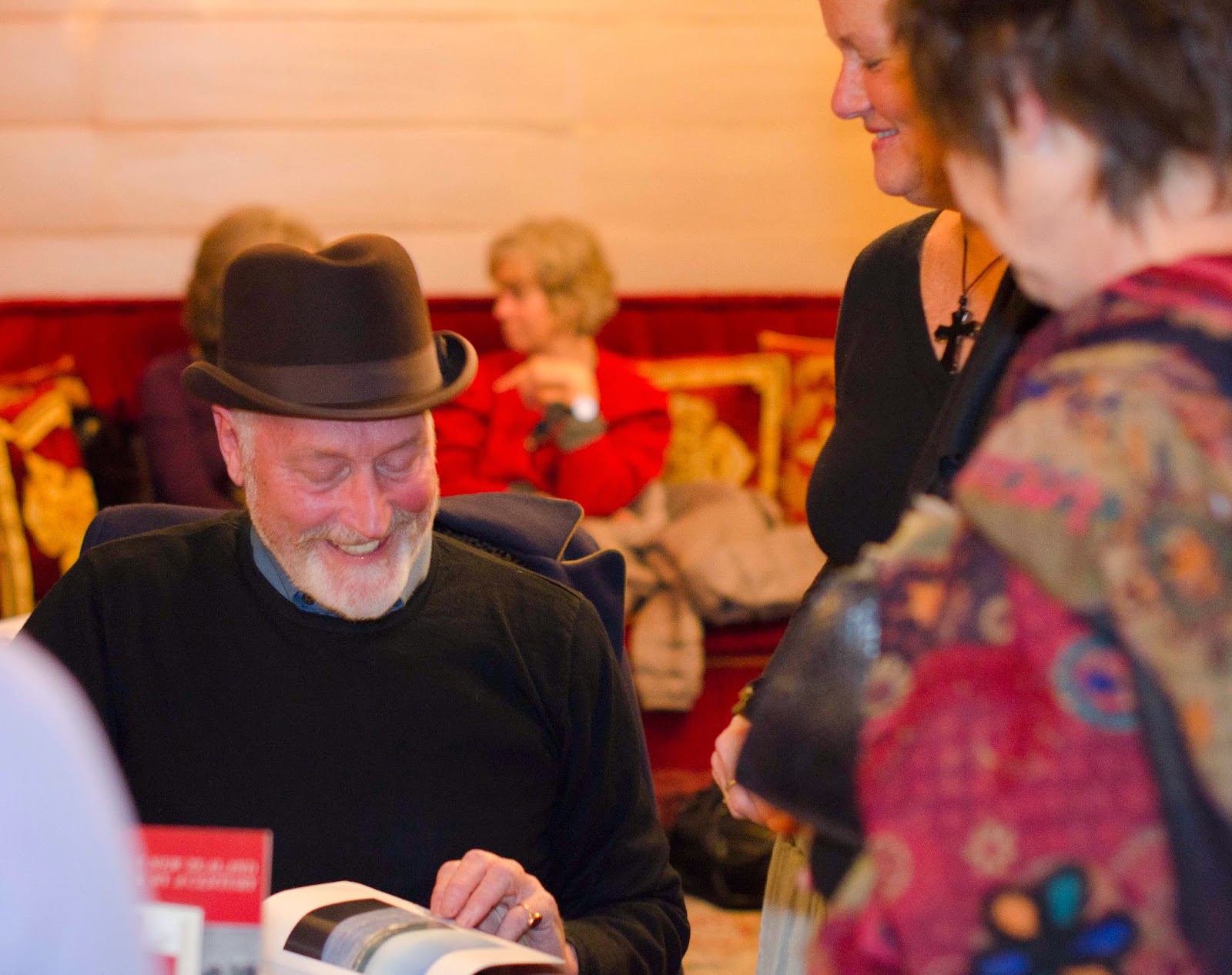 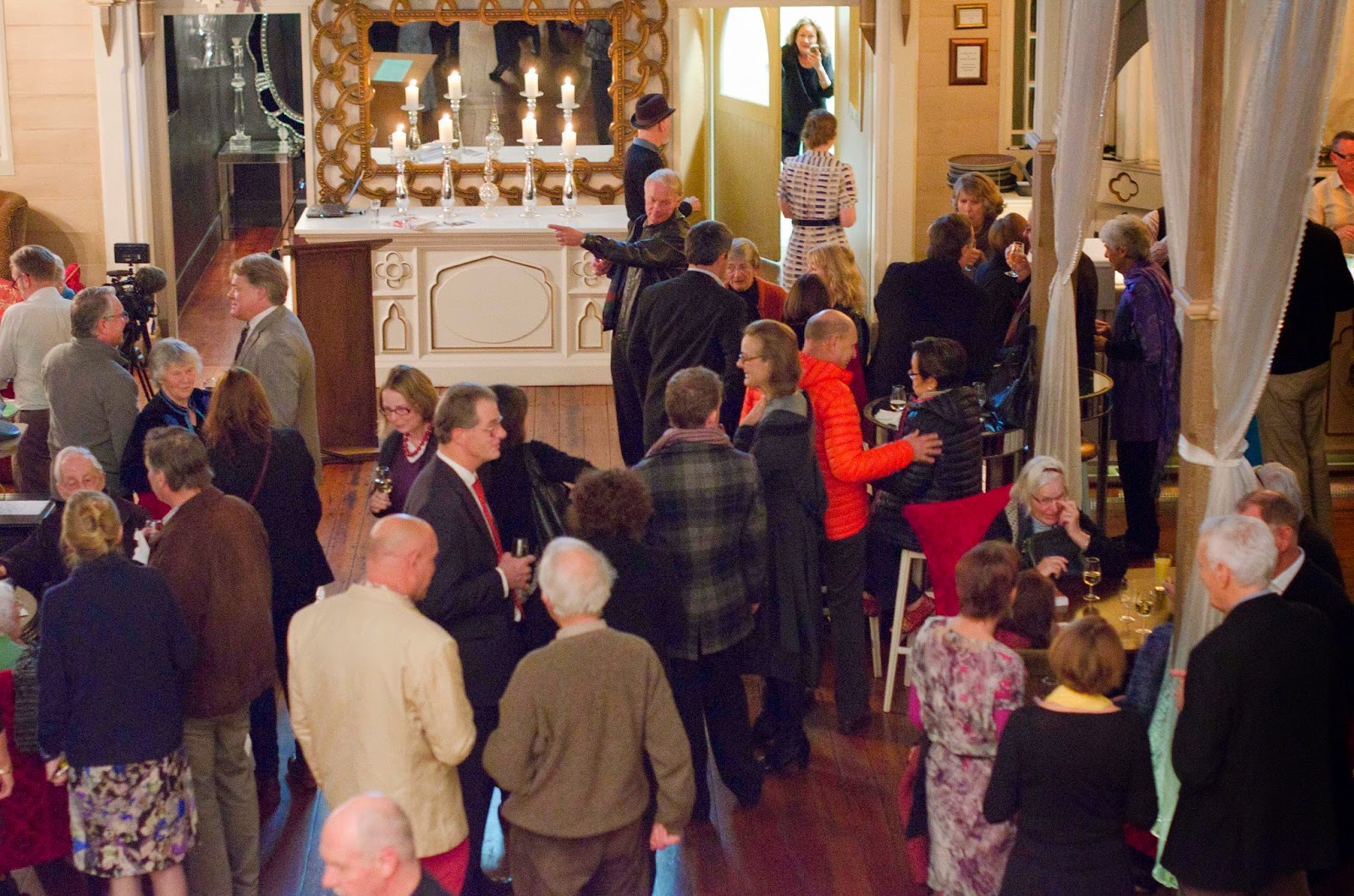 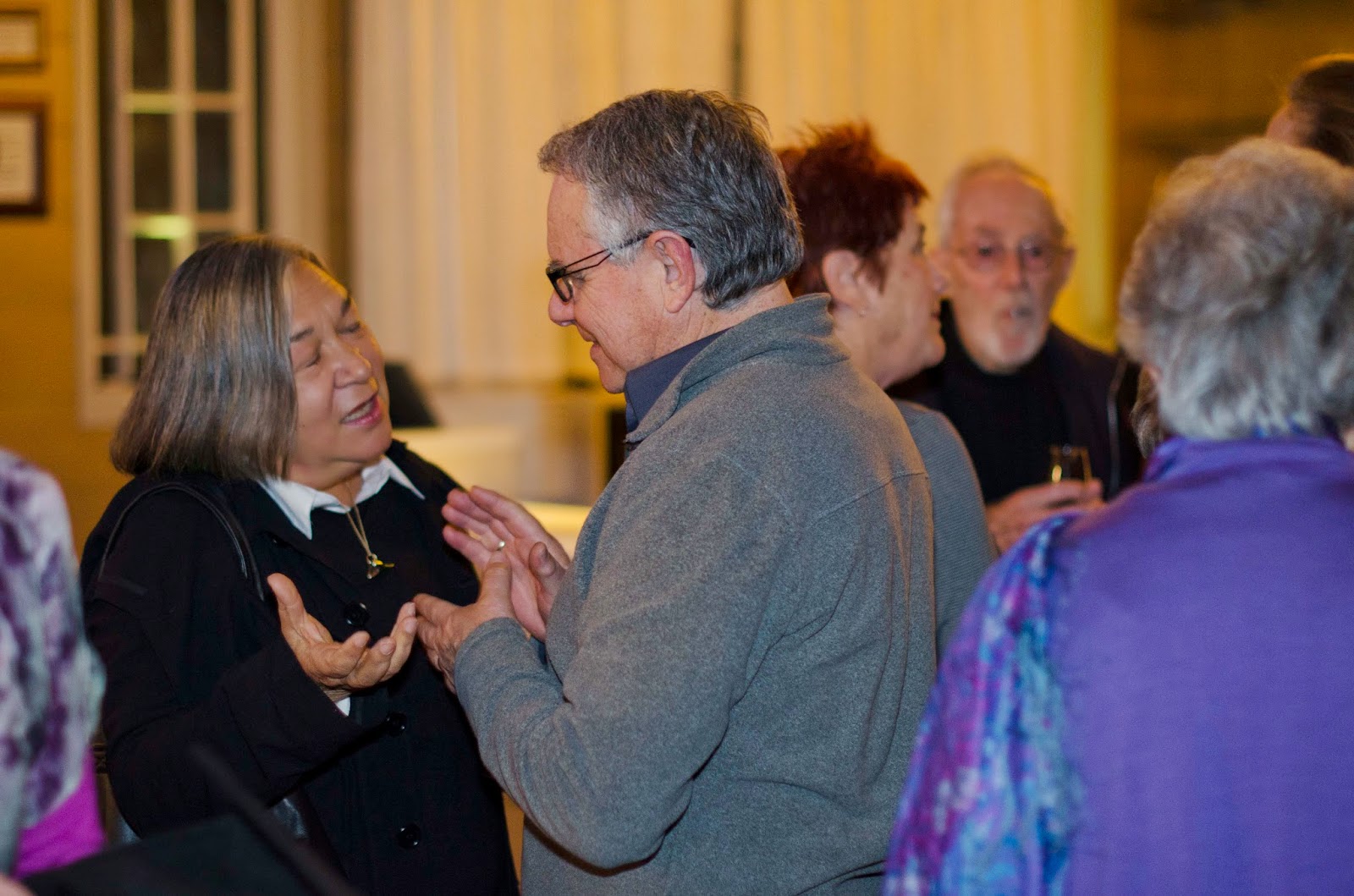 Well, on Monday night, Journey to a Hanging was well and truly launched at the Old Church
Restaurant Meeanee. MTG Hawke's Bay assisted brilliantly with the launch, with staff members
generously donating their time and energy to give the occasion a really warm atmosphere.

I've put the talk I gave below, so you can see how I conceptualised the book
at its public birth, among friends and followers.

I was also fortunate to do some media for the book. (I'll enclose the links below.) One was a lively and
energetic interview with Kathryn Ryan on Nine to Noon, National Radio - Kathryn seemed very
involved with the subject, which was great.

The other more surprising interview was for Te Kaea, the News on Maori TV. They had sent a crew
to the book launch and did an on the spot interview afterwards. I was amazed - and gratified - to see it
occupying about five minutes on Maori TV news last night - 8 July '14 - where it was treated seriously - and with really close
with interest.

The other in-depth interview I did was with Hawke's Bay TV. This is harder to find for people out of
the region, but will eventually be on Youtube.

So here is my launch speech.

"It seems especially fitting we're standing here in the body of the church that was once Sister Mary
Joseph Aubert's.

It was from this church that Sister Aubert set out on a Thursday afternoon of January 4th 1872 and
began her walk in to Napier, to go and visit Kereopa Te Rau on the hill in Napier Prison.

He was to be hanged on the Friday and it was her wish to go and comfort the condemned man.

But we need to backtrack here, to fill in the back story.

Kereopa Te Rau was charged with the murder of the Anglican missionary with the strange Germanic
name of Carl Sylvius Volkner.

The murder happened in March 1865 at Opotiki - and it was an especially grisly murder, especially
for a traditionally tapu person - a man of God.

Volkner was first rather amateurishly hanged, then when dead, beheaded and his head was passed
into his own church where Kereopa Te Rau ate his eyes and drank his blood. His head was then
mummified - turned into a moko mokai.

Ever since then Kereopa Te Rau had been on the run, fighting battles, then fading into the
Urewera mists.

By 1871 Tuhoe were ready to sign a peace pact with the Crown. They could no longer withstand
the battering they were receiving from kupapa and colonial troops.

Part of this was an agreement to hand over Kereopa who had a 1000 pound bounty on his head.

Kereopa was captured and marched to Wairoa, then put on a boat to Napier.

The news spread around NZ - and around the world - the notorious eye eater - Kaiwhatu - was
captured at last and being brought to justice.

On Sunday 26 November 1871 the entire population of Napier waited on the wharves to see Kereopa.
He was kept below on the orders of JD Ormand and Sir Donald McLean.
Eventually - disappointed - the crowd dispersed.

The following morning Ropata Wahawaha -a Ngati Porou warrior who had once been a slave -
brought Kereopa into town.

He insisted on a triumphant march - a king brought in chains - so he marched Kereopa along
Waghorne Street, up along Shakespeare Road - then he got to Coote Road.
This led directly to the prison.

But no, Ropata wanted a triumph - he had been hunting Kereopa for many years in terribly
challenging conditions - so down Shakespeare Road they marched, a brilliant Pai Marire banner in
scarlet silk and white fluttering in the breeze, - they marched past the Govt Builidngs where
Kereopa would be tried on the corner of Shakespeare and Hastings Street - they marched along
Hastings Street - and only then along the Parade to the corner of Coote Road.

There Kereopa was handed over to Pakeha control.

He was marched up that steep incline to the prison.

But just as he entered the prison, he dropped a cut throat razor on the ground - and with bound hands
- grabbed it QUICK AS THOUGHT as a newspaper put it- and slashed his throat open.
Chaos.
Blood was everywhere.

The three doctors of Napier were all called.
Dr Spenser, the brilliant military doctor - famous for sewing up limbs - was first on the spot.
He sewed up Kereopa's throat - he had just missed the jugular - and brandy was administered.

Kereopa was taken to a wooden cell, placed in their alongside two Pakeha prisoners and chained to
the wall.

And there Kereopa stayed, through his trial on Friday 22 Dec 1871  when he was found guilty of murder
and sentenced to death.

There he stayed through Xmas and New Year -

hearing the band music played by the military bands

hearing the jollity and drunkenness hymns and silences

he was to be the first man hanged in Hawke's Bay.

At this time, when everyone local rejoiced in his capture and eagerly looked forward to his death
one man
one man alone in the whole of NZ stood forth to defend him

that man was the remarkable William Colenso
Colenso speedily wrote a defence published in the Hawke's Bay Herald over three days calling for
mercy.
he didn't argue whether Kereopa was guilty or not

- what happens during those last hours, ….well, you have to buy my book and see….

this book is about New Zealand, about Hawke's Bay, about the past, about the ancestors of
some of the people who today stand in this room -

events that galvanised and divided NZ in its own town,
echoes of which travel right up to this very present day

just as i felt, writing this book,
being pulled in different directions at different times
but also trying to be empathetic
without being conned into a false sympathy

and this was what i came up with in the end

there are many paths to understanding

so all in all
though this represents a book with pages and pictures, and facts, and thoughts, and intuitions
and I hope insights

in the end this is all it amounts to

there are many paths to understanding

and this book is one of them.


Kathryn Ryan interview on Nine to Noon, National Radio
A link to the audio can be found here: http://www.radionz.co.nz/national/programmes/ninetonoon/audio/20140837/historian-reinvestigates-1872-hanging-of-kereopa-te-rau

See below for Te Kaea, News on Maori Television 8 July 2014.