I thought I'd talk about a few of the illustrations in my book Journey to a Hanging. I always love placing pictures inside books. It is where the film-maker in me comes out. And in my last book I worked out a way of illustrating which was a mixture of my contemporary photos and historical images. They seem to go together well and illustrate the double focus of my writing - a contemporary take on the past.

Here though I thought I'd talk about an historical image which intrigued me.

This is a photo of CS Volkner which was taken by his close friend John Kinder. Kinder was a well educated man who spoke German. (In the 19th century Germany was seen as the land of Goethe, of advanced educational reform, of civilisation. At Kinder's house, which still exists at the top of Ayr Street Parnell, behind the Auckland Museum, CS Volkner and Kinder could relax, speaking in German, ranging over many topics.)

But Kinder, as well as a teacher at Auckland Grammar was also a very talented watercolorist and, in his spare time, a photographer.

This was an exacting art and he practiced taking photographs of friends and family. He supplied some of the images of CS Volkner which were used over and over again, after CS Volkner's terrible death. But among his papers was a less familiar photograph. When I found it, looking through papers at the Auckland Museum, I felt a tremendous sense of excitement. This was partly because it dislodged the over-familiar images.

But it was more than that. It seemed informal, and psychologically acute. Unusually in 19th century photography, it was a close up. But Carl Sylvius appears to be looking deep into the camera - almost as if he is staring into the future which he will soon vacate. His expression is ambiguous. You can sense his good looks - his hair colour was described as corn-yellow, his eyes were that greyish-blue colour - so his colouring was Germanic - one hesitates to say Aryan, because the much later Nazi appropriation of this type of colouring. But his features are regular and comely. He was in his early 40s. 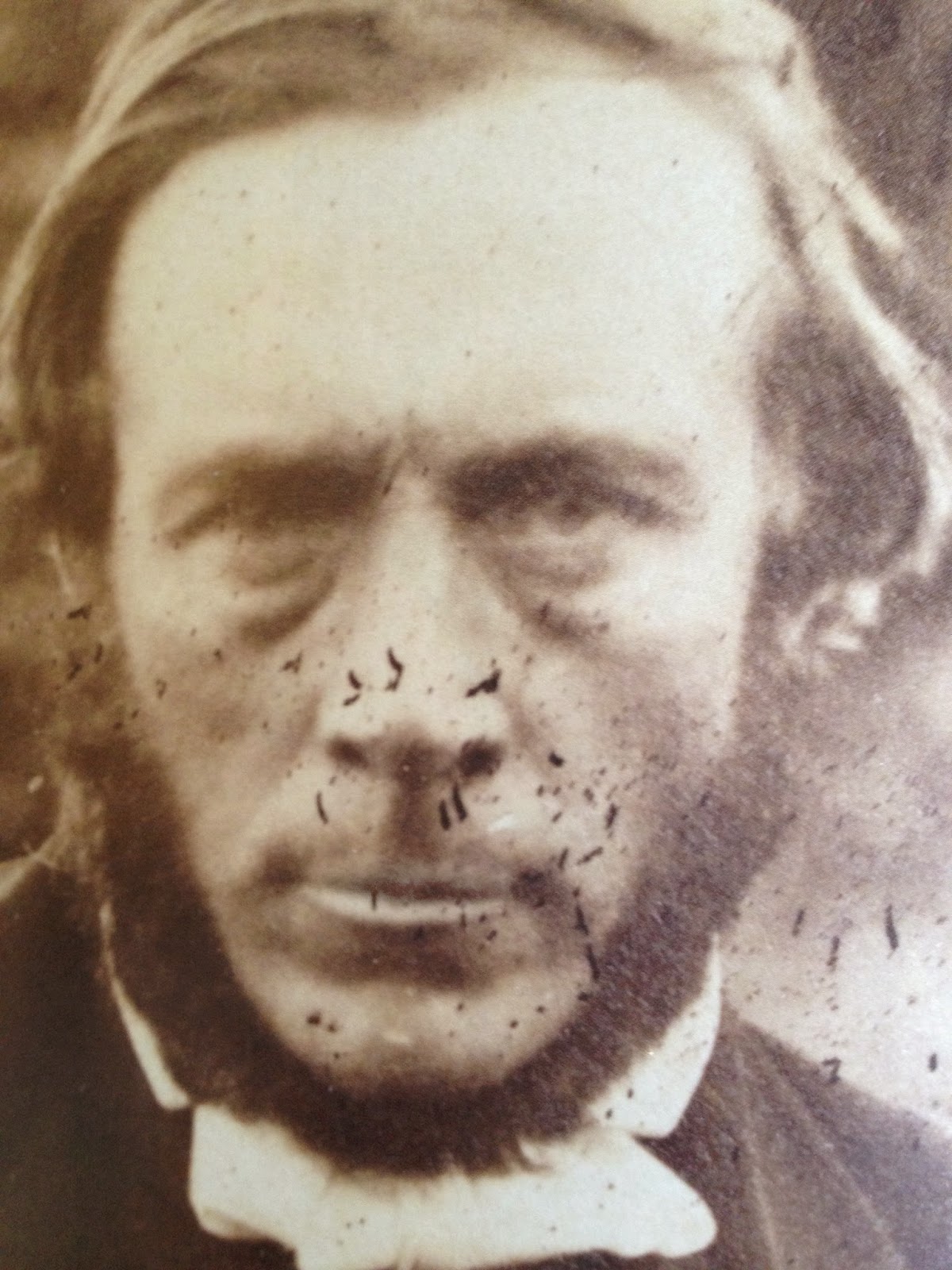 (This photograph was probably not often used because of defects on the surface of the photo, the small blotches of black which might indicate some failure during the development process. But this 'failure' goes along with a great sense of reality, informality, insight.)

CS Volkner's hand is also in the shot, clasped. He stares into the camera and sees - what? Doubt? Uncertainty? Or is it certainty that he displays, that 'too firm' principle that a fellow German missionary, Kissling, said he would lose in time, as he got older and more experienced? But of course we know he had no time ahead of him. Or only a little.

So this living portrait is a momento mori (a memory or harbinger of death) - just as photography itself is meant to be, according to Susan Sontag, an expression of the swift passing of time, essentially celebrating and marking the motion of present into the past - or passed.

I have to confess something further. When I see this picture of CS Volkner's head something in me takes a horrible step sideways, into the grotesque. This is a very difficult and potentially explosive area to examine. But this is to imagine what
CS Volkner's head actually looked like when it was made into a moko mokai by the Pai Marire in Opotiki on 2 March 1865.

What is a moko mokai? It is a human head smoked, its eyes removed, its brains sucked out. The head was then boiled and the flesh smoothed out. Straw was often stuck up the nose to ensure the nasal cavity was kept straight. At times the lips were stitched together but often the lips were parted to reveal, horrifically, the state of the dental work of the human. At times this gives the shrunken head the appearance of a fiendish grin.

I have to admit I find even writing this turns my stomach. I am a person who looks away from the television screen when they show operations or internal medical explorations. I dislike blood and gore.

But there was of course another layering to this seemingly barbaric custom. Within Maori culture, moko mokai had a ceremonial or ritualistic place. It was not simply an expression of cannibalism (the eating of body parts) but was an expression of wairua and power.

By eating somebody you consumed their mana, you overpowered their life essence, and, in a parallel act, you defamed them forever by shitting out their remains.

That this occurred as late as 1865 - a time of railways and global travel - of chloroform and corsets  - indicates something about this act. It was 'out of time' , looked backwards to an earlier time when the eating of humans was a constant in Maori culture. (After all Christianity in the East Cape of the North Island had a name that literally translated into 'the instrument that removed human flesh from our teeth.')

It was part of the turmoil of the land wars of the 1860s that a Christian/Anglican minister was selected for a return to ancient, pre-Christian customs.

So CS Volkner was hanged, then beheaded somewhat crudely, then his head was turned into a moko mokai by elders who still clearly remembered the customs which had only really stopped 35 years before. (So imagine for yourself something you did 35 years ago, like perhaps using a dial telephone. You would still instinctively be able to do this today.)

His eyes were removed and later swallowed by Kereopa Te Rau in CS Volkner's church. This was again done in a ceremonial manner, though nobody can agree on what Kereopa Te Rau actually said. (And he himself tried to deny that he had actually eaten the eyes at his trial in Napier in 1871. He said he only 'pretended' to eat them and he denied saying anything of any importance.)

There was something astonishingly appalling about the beheading. It fed directly into the 19th century taste for the grotesque. (Captain Morris Levy who was present during the killing, though possibly not seeing the actual hanging and beheading, asked to look at the head, to see it with his own eyes, soon after the moko mokai of CS Volkner was completed. There was something about 'seeing is believing' here.)

CS Volkner's death exploded into the newspapers in Auckland, then Sydney, then by telegraph and later reports all around the world. It was a scandal, a shock-horror episode and bizarrely 'amusing' case of a missionary being 'eaten' by the tribe who were supposed to be being converted by him. Burlesque poems followed, along with punning headlines - and calls for revenge.

Lost in all this was one person: CS Volkner. He became a holy victim who swiftly became a saint.

And also lost in all this was Kereopa Te Rau, the man who swallowed CS Volkner's eyes. He became 'a devil'.

So that in essence is the trajectory of my story. The story of a 'saint' and a 'devil'.

It is also, in that double focus, the story of how we see those terms today.

But for me, this intimate photograph of CS Volkner is important, as it reveals the human.

We have to find the human, to unlock the real story.