This photo is in my new book Journey to a Hanging.

It relates to a key New Zealand film, Utu.

Why is a film-still in a history book?

Wasn't the film a fictional drama and isn't my book a factual history?

Yes and yes and no and no is the improbable answer.

The still relates to a highly dramatic moment in the fictional drama of Utu. (The film is about the experiences of an imaginary Maori warrior called 'Te Wheke'.) Te Wheke in the drama has just experienced the slaughter of his wife and family by British soldiers. This horrific experience becomes the source of a burning desire for utu - revenge - on Te Wheke's part. (A little like Russell Crowe in 'The Gladiator' - the slaughter of the gladiator's wife and children by Roman soldiers turns the gladiotor against the whole Roman Empire.)

Te Wheke's first act of revenge leads him to a church. A Protestant minister - with a beard curiously like CS Volkner - is preaching. The director and writers of the film had a standard 1970s anti-establishment view of religion so the minister is seen as ugly, vengeful and hypocritical. Te Wheke takes the church by surprise. He kills the minister - shoots him dead. But it is the next scene that interests us.

This shows him at the pulpit of the church, holding the beheaded head of the Protestant minister. He rages against British colonialism. And the head is brandished about as a talisman. 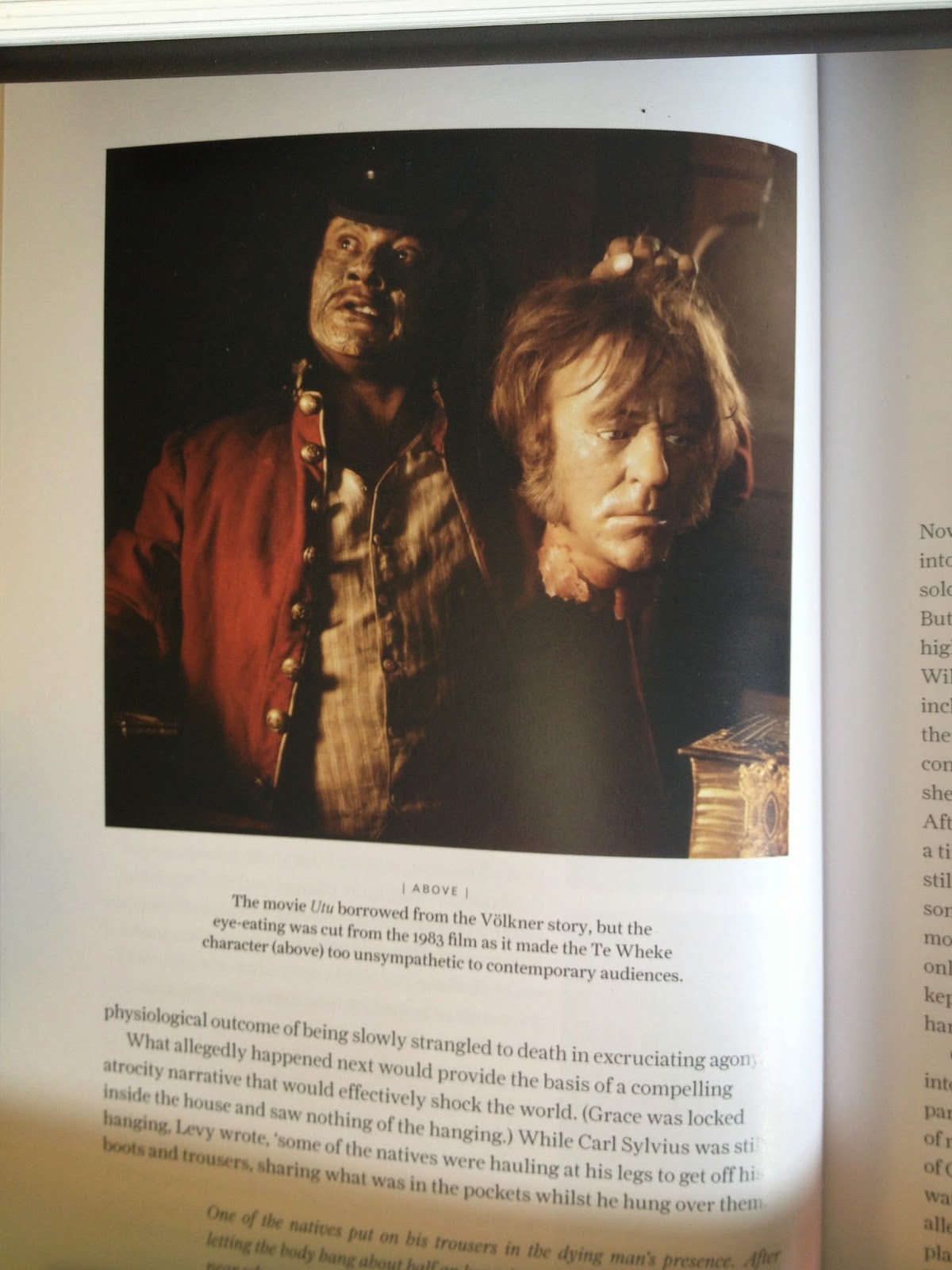 This is, of course, a precis of what Kereopa Te Rau was said to have done with CS Volkner's head at Opotiki, inside the Anglican Church, on 2 March 1865.

This shows how deeply implanted the killing was in the New Zealand psyche, even as late as 1983. Utu's writers, rummaging round in that deep dark bloodied sack of New Zealand's history, found a key moment.

They used it in their drama to mark a progression in Te Wheke's character. He reaches a point of no-return. From now on, it will be war to the death.

The killing of a minister, but even more so, the showy symbolism of holding the minister's head in his hands, inside a Christian church, at the very pulpit in which the voice of the Christian God is meant to speak, was an act of rebellion.

In many ways it was a moment of brilliant theatre.

All around the world people gasped.

But there is something which doesn't happen in the Utu film, and this is what interests me.

Or rather there was something else actually filmed but it was edited out of the film. During the filming, Te Wheke also swallows the Protestant minister's eyes.

This of course is simply following the historical narrative of Kereopa Te Rau eating the eyes of CS Volkner, accompanying the act with a symbolic statement. (This statement varied, according to listeners, from being specifically about one eye representing Queen Victoria and the other eye, the colonial or London Parliament - to Kereopa Te Rau raging against the disappearance of Maori control of their land and destiny.)

At his trial for murder in 1871, Kereopa Te Rau asserted he said nothing of any import.

In fact during his trial he denied eating the eyes at all.

He said he only ' pretended to'. This was in part an astute assessment of the degree to which the eye-eating actually fueled the anger against him - the disgust. He believed it was the eye eating that led to his being found guilty of murder (rather than, say, the literal hanging of CS Volkner for which he was actually charged. There was no separate law against eye-eating in the British statute books - for perhaps obvious reasons.)

Regardless, during the editing of Utu, the eye-eating was dropped.

Because test audiences, or the director and his editor, decided it made Te Wheke 'too unsympathetic' to contemporary audiences.

(This is all based on a relatively recent interview with Anzac Wallace who acted the Te Wheke role. The interview came out last year when the redigitised version of Utu Redux was released to new and appreciative audiences.)

This interests me. If eye-eating is still 'unsympathetic' as late as 1983 - when in fact many codes to do with sexuality, behaviour, drugs, life style - were being broken down - it seems to infer that eye-eating, in an earlier age when codes of behaviour were so much more prohibitively strict - was even more outrageous.

So while today there is a determined attempt to remove the stain of 'Kaiwhatu' - 'the Eye eater' nickname that Kereopa Te Rau wore during the 19th and much of the 20th century - the fact remains that this symbolic act which Kereopa Te Rau is associated with does have a continued power.

I understand entirely the action of whanau sympathetic to Kereopa Te Rau who wish to see his life in a broader context. The eye-eating was one pivotal moment in a much longer life. It also had precedents, as I discussed in my last blog, in pre-European Maori culture. It had an entirely legitimate meaning in terms of this pre-Pakeha Maori culture.

Look at hanging in European culture. It was totally accepted as a form of punishment - for quite minor crimes at times - right up until late in the 20th century. Homosexuality is another case. Right up until comparatively recently, homosexuality was criminalised and deeply stigmatised in many cultures.

But cultures tend to be restlessly developing entities. What is acceptable at one point suddenly becomes reprehensible and even repulsive in another. Eye eating in Maori culture, in the 1820s  was quite acceptable, as was ceremonial cannibalism and slavery. But by the 1860s, we are entering - globally- another world. Slavery has been banished in the British Empire since the 1820s, although slavery inside the Maori world continued on for much longer.

So was Kereopa Te Rau caught out, enacting a symbolic gesture the morality of which time had eroded and hollowed out and changed forever?

Perhaps. In the heat of the moment, it seemed a brilliantly symbolic act. His wife and two daughters were said to have been burnt to death by British soldiers earlier, so he effectively had a motive.

The only problem here is that Kereopa Te Rau stoutly refused to accept this as a motive for his actions, even in his final letters to the world in the days before his death.

It is a very complicated story, as all human actions are, which take place at one particular moment but have to be understood in the longer context of someone's life, and changes in the way we view behaviour.

But the above still from the film interests me greatly, for what it says about how CS Volkner's death remained as a enduring symbol in the minds of New Zealanders - a grand guignol nightmare. But the still is also interesting in that the eye-eating, filmed at the time, and which Anzac Wallace said was disgusting to do, was edited out.

The symbolic removal of the eye-eating points to how some things need to be left out of a story, if you want to make your character sympathetic. If you want audiences to identify with your journey.

This relates to the contemporary attempt to rehabilitate Kereopa Te Rau and give his life a broader meaning than the one spectacularly gory act.

Unfortunately people tend to be seen in haiku form - compressed, all their changeable brilliance and various acts condensed into a single hieroglyph which often is even shortened further into good or bad.

At the moment the Office of Treaty Settlements and the Parliament of New Zealand have decided that Kereopa Te Rau should be officially pardoned. Surprisingly this became law on 9 April 2014 and got the royal assent on 16 April 2014. (I say surprising as I do not recall seeing a single mention of this extraordinarily historical act anywhere in the media.)

Part of this pardon is a kind of symbolic deleting of this act which is not even mentioned in the act.

So just as in the editing of Utu a too painful, too negatively constructed act, is removed from sight, so Kereopa Te Rau is remodelled for future time with a controversial act, not exactly removed, but certainly dampened down and tamped down so it no longer defines him.

In fact that is the nature of air brushing in contemporary history, the blemish is removed completely.

Kereopa Te Rau is 'The Eye Eater' no more. He is just another victim of colonialism.

Whether this is strictly speaking, historically accurate, is another question. But few people today would accuse the Office of Treaty Settlements of historical accuracy.

Rather history is bent to the purposes of the state.  People are cleansed of past mistakes and presented to the future as idealised portraits.

To me this is understandable, in some senses, as a way of dampening down a century and a half of stigmatising and pain for Kereopa Te Rau's whanau and iwi. Whether it is being true to the core question inside history - what happened, why, when and how - is another question entirely.