Fears in the night - pre-launch nerves 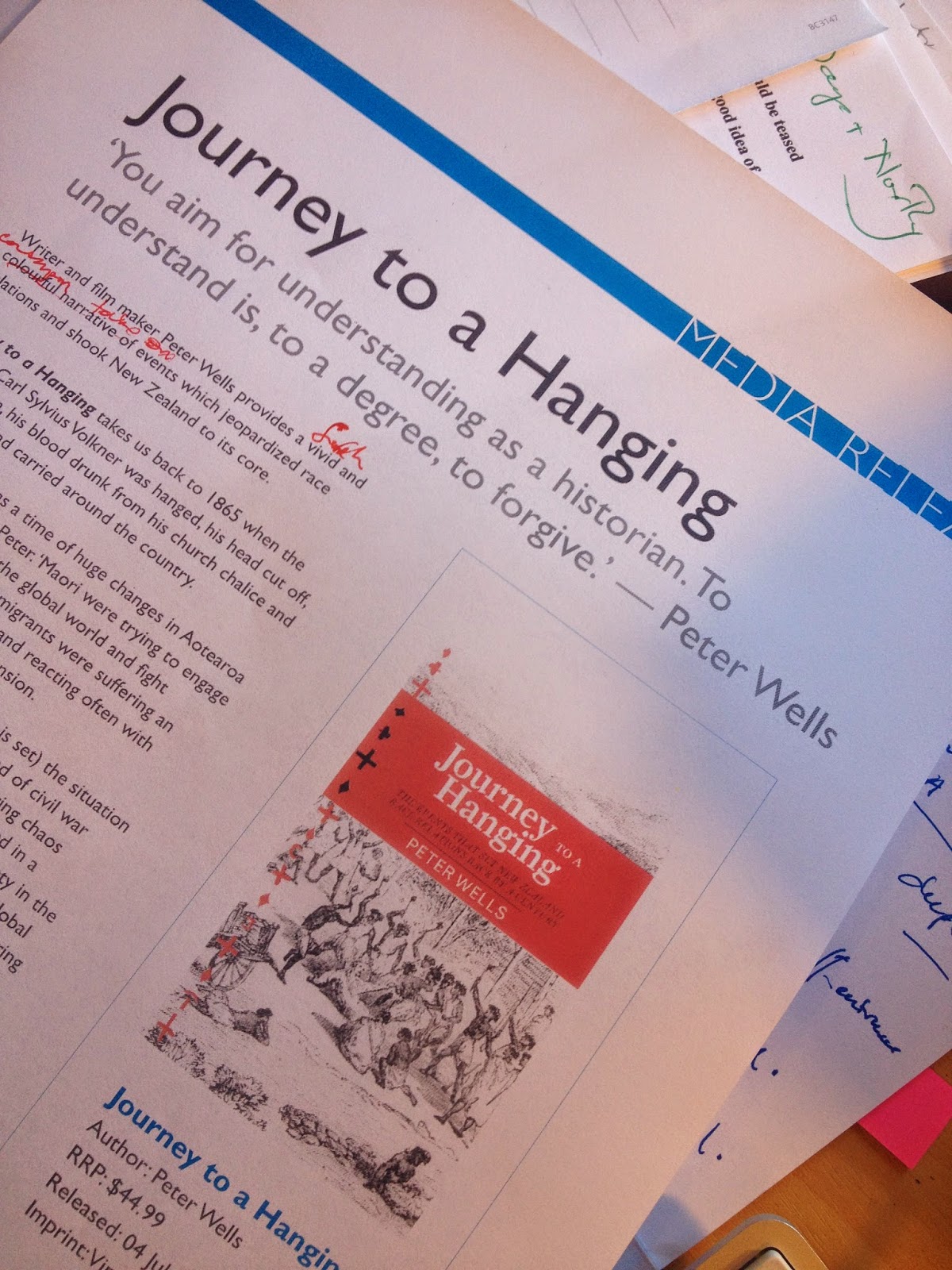 I am in that nervous stage of anticipation before a book comes out. I really don't know how it will go. In the best of all worlds you hope a book will be received well. But in the long hours of the night you can catastrophise.

I know I did this a lot with The Hungry Heart, my Colenso book. I imagined all sorts of people objecting to it. What would they object to? Well, in its own small way, it was a rewrite of our history, less concerned with the routine grievance point of view of our colonial history. This has been very important in our immediate past,  redressing past injustices. But now many Treaty settlements have occurred and the Treaty has become reanimated as a living document, I think the historian's role has to evolve.

I think it is timely now to go back to the 19th century and relook at it, not framing it with grievance (often the history written in the immediate past was framed specifically to right wrongs but also as a form of fast forwarding Treaty negotiations. Judith Binney is a good case in point. She went from writing about Tuhoe to becoming virtually their Pakeha spokesperson, literally so in Treaty negotiations - a complicated dance for any historian.)

Left out of this debate was the role and experience of the new migrants who fundamentally helped shape the world we live in today - Pakeha. They only entered the discourse in the past 30 years as destructive negative beings. They seemingly contributed nothing and, apparently, contaminated everything in this historical view. (Binney for example never looked at the migrant experience as having any validity. She overlooked this in her high octane operas of injustice, concentrating almost entirely on Maori experiences. But even here she chose to overlook the experience of kupapa - they were invalid in her view, not confirming to what I might uncharitably call her search for a Che Guevera  role model - she found him in the form of Te Kooti Arikirangi.)

So here we have a history which is explicitly modelled on only a proportion of the population. Kupapa are ignored as not fulfilling their 'right historical destiny' and Pakeha are definitely to be left out of the picture - except when they obligingly fulfil the role of an almost Punch and Judy bad guy. The ordinary migrant experience of arriving, working hard, creating an infrastructure for family - living working loving and dying -  is always overlooked contemptuously in this view as 'not being important'.

Yet the fact is it is the experience of many people to this country - and as new migrants swell the population - it will continue to be a very important strand in our history.

It always amazes me that Pakeha are so unwilling to look back at what their ancestors struggled to do and so willingly fulfil this masochistic role of perennial bad guy, as if they accept this is their 'rightful' historical destiny (shitting on your ancestors is what I call it.)

Even two days ago at the memorial for the Gate Pa battle, the reportage was of the powerful haka - which was followed by the characteristic forelock tugging of the Pakeha Jonathan Colman who droned on about how 'the battle was a significant victory for the heavily outnumbered Maori , who inflicted on the British soldiers one of the biggest defeats of the New Zealand wars.'

I wonder if he, reading the notes provided by his assistants, had any wider or broader or deeper understanding of the battle? Of where it fitted in, of what else happened - of the remarkable acts of bravery and compassion during this terrible battle? It is like Pakeha are tone-deaf to their own history and can only read from a songsheet presented to them by people who in turn have little insight into the powerful story of our mingled past.

*
I was talking about this yesterday with my friend, novelist Stephanie Johnson. Stephanie's novels are very interesting in that they often portray an historical past which features the interpenetration of the Maori and Pakeha worlds - the way they are, in fact , mutually interdependent. (The Open World, set during Bishop Selwyn's time and actually about one of Stephanie's woman ancestors, is a case in point but even her satirical novel John Tomb's Head, which looked at a group of Maori going overseas to retrieve what turned out to be a Pakeha moko mokai, looks at the way we are fated to live beside one another.)

Her family like mine came to New Zealand in the early colonial period - perhaps this longevity gives you a sense of investment in the cultural landscape? Alternatively, if you are interested in the past this relative longevity gives you a larger field to look at.  But as I said to her, the thing I find so grievous about so many Pakeha is that they do something Polynesian cultures (and really most other cultures in the world) refuse to do: Pakeha happily shit on their ancestors' experience.

They do this in two ways. One is to 'refuse' to have anything to do with their own past. They refuse to own it because it is 'so terrible'. This view is based on naivety. A glance at any history of what has happened in the past two centuries in every country on earth reveals parallel and often much worse histories - often on the same themes, eradication, massacre, starvation. I hate to disillusion these ninnies but this 'terribleness' has been going on for as long as humans have occupied the earth. It is part of human nature. It isn't organised on tidy racial lines either. Maori were very good at killing each other before Pakeha arrived, as many Maori would admit.

The contemporary Pakeha reflex is one of moaning guilt. I came across this a few weeks ago when I was about to give a talk on how Pakeha have lost the trail to their own past. (And how they prefer just about any culture so long as it isn't their own.) The person introducing me gave me a quick rundown of how she planned to introduce me and the themes of my talk.

This was to say how she had been talking to some Maori who told her that when the Queen was coming here in 1953 the authorities 'tidied up' the Maori village which was near Bastion Point. (My talk was at the time the Duke and Duchess of Cambridge were making their triumphant way round New Zealand.) In 1953 the authorities tidied up the settlement by burning down the houses. But, she said, they didn't bother to look inside so they burnt down a house with a baby in it.

I felt a deep exasperation. As an historian I wanted to say - where is the evidence for this? Is it 'oral history' or was there any documentation I could look at? Could a baby being burnt to death be hushed up in 1953/54? If so that was a story in itself. But as an introduction for the themes of my talk, I could hardly think of a more off-tune one. (Perhaps alternatively it would have beautifully illustrated my theme.)

I said - tersely - I would prefer just the simplest introduction.

The thing was the person was full of good will. But why would you think this dreadful fact - if indeed it was a fact - would illustrate the whole history of Pakeha life in Aotearoa New Zealand? Or wasn't this it in a nutshell? A huge sack of poisonous guilt, so vast it hardly had any specific core, except the most devastating act of malice and horror.

But this is as slanted as saying that all of Maori history to Pakeha can be illustrated by - say - Te Kooti Arikirangi orchestrating the bashing out of a baby's brains when Alice Wilson had her baby snatched from her hands - the baby was smashed on the ground - before she was bayonetted to death - she took many weeks to die - and of course she had had to live through seeing her husband and all her children apart from one killed before her very eyes. (This was during the so called 'Poverty Bay Massacre'.)

Yes this happened, but it isn't representative of all Maori history or their relationship to Pakeha. To say it was would be a complete lie. So why would a Pakeha so eagerly believe she was being 'true' to the past by relating a parallel
incident?

*
Is it a way of trying to earn 'brownie points' (to risk using a potentially dangerous term) in the new bicultural world? A happy mortification of the soul? A shreiving before the vast weight of cultural guilt?

Or is this really just a continuation of the typical lower-middle-class Dickensian creepiness of Uriah Heap. *Uriah Heep is a fictional character created by Charles Dickens in his novel David Copperfield. The character is notable for his cloying humility, obsequiousness, and insincerity, making frequent references to his own "'humbleness". His name has become synonymous with being a yes man.' (Thank you Wikipedia.)

I guess all these thoughts were what kept me awake when I worried about how 'The Hungry Heart' would be received.

To my surprise the book had an excellent reception. 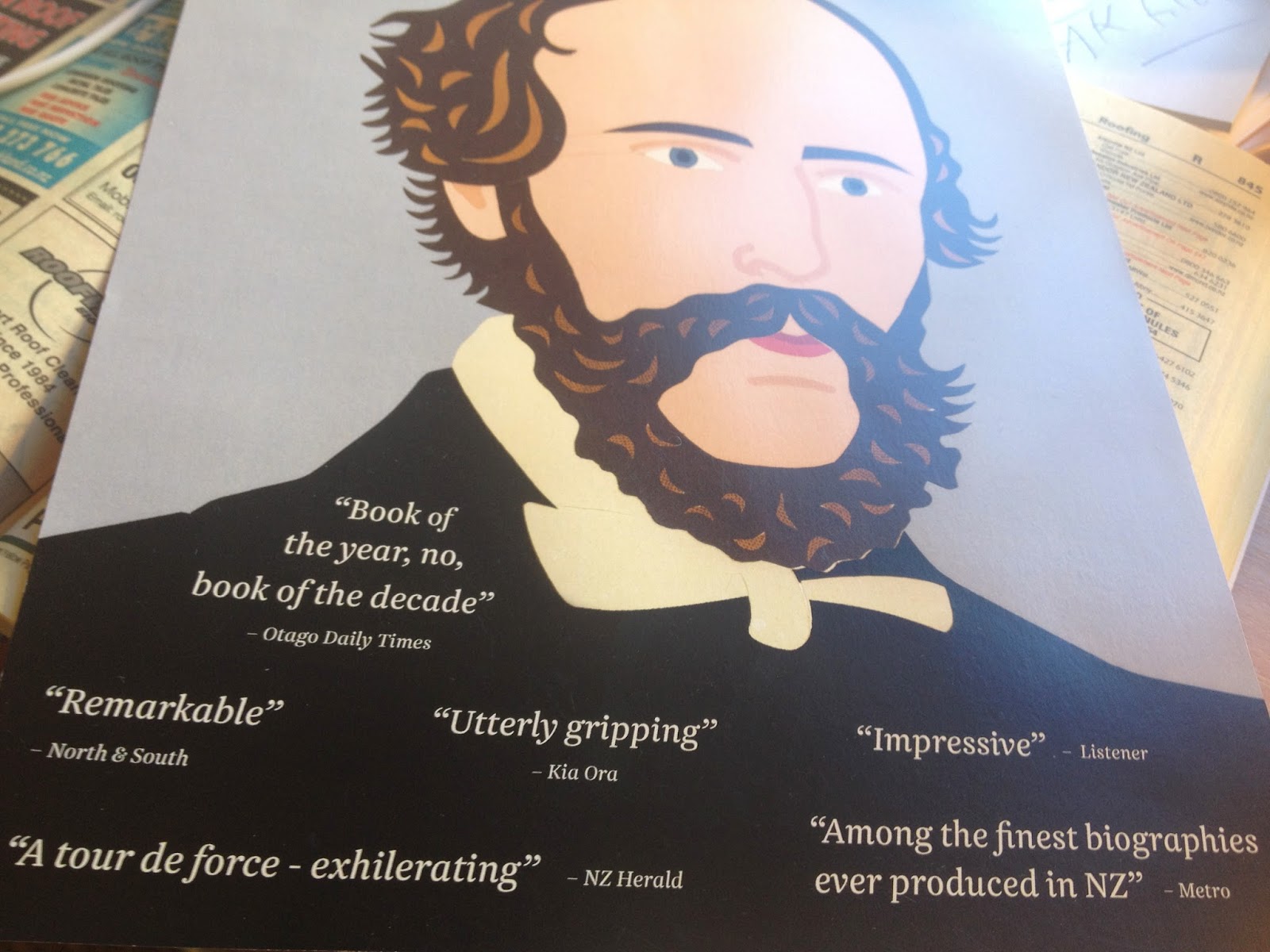 Part of this - never explicitly expressed - was, I feel, a huge sigh of relief that somebody at last was not going to look at history in terms of expiating guilt and abasing himself or herself before the tomb of grievance.

I wanted to widen the lens to look at the complicated dance of acceptance, anger, denial and then a kind of love which is inseparable from any migrant's experience in a new land.

It is a formative experience for many of us - learning to love the land we are born in.

As for my new book….well, let's just say, I can barely bear to think of how this will be received. Each book is a new venture. And, well….here's hoping, folks.