There is one very well known photograph of Kereopa Te Rau. This was taken by Samuel Carnell, an outstanding Napier photographer on the 8th December 1871.

We know this because the date is scratched into the negative, as is the person's name. (You can see it easily by googling 'Kereopa Te Rau'.)

Kereopa by this time was in the Napier Prison, awaiting his trial - and he knew already - his execution. He knew this because he had already tried to exit the situation.

Walking into Napier Prison a cut-throat razor slipped out of his clothes - before he could be searched. Incredibly quickly, given he was handcuffed, he managed to grab the razor and slit his throat.

Though blood went everywhere, he did not die - he missed the major artery - and soon three doctors were on site, and one, Dr Hitchings, expertly sewed his throat up.

The photograph by Carnell shows Kereopa's misery. Carnell would have brought the props - ie Maori cloak - to the prison, so he looked 'legitimately' Maori. Perhaps because Kereopa looks so very pensive and sad, Carnell also overdrew, on the negative, his moko.

This was an attempt to make a man whom many Pakeha saw as a terrorist look more 'terrifying'.

It had an element about it of kids collecting certain kinds of cards.

Also photography, as a relatively new invention, delivered the news of what someone actually looked like - across space and time. In its own way it was remarkable.

Carnell later went on to be the chosen photographer for Hawke's Bay Maori. They felt at ease preening in front of his camera, rarely choosing to wear by-then 'antique' Maori costume. Instead they chose high status Pakeha outfits, refitted to ensure their own identity was recognised, mixed in with moko and other identifiable Maori elements.

These were collected in a fine book called Nga Tamata which you can still find in bookshops.

But my mystery began with an idle evening recently when I did the obvious (which sometimes occurs quite late in research.) I googled Te Papa to see what they had of Kereopa Te Rau.

The two photos they had of him were from the same image - the famous (or infamous) one.

But I also noted there was another image, not on-line because permission from his iwi was needed. This piqued my curiosity immensely, as I was eager to see another image of Kereopa.

The curator at Te Papa kindly sent me an image which could not however be copied or used publicly.

It was another image, but I was unsure whether it was Kereopa. (Kereopa was a missionary name turned into Maori, not a specific identity. ie there were lots of Kereopas.)

The image showed a rather plump man, once again wearing antique costume, holding a patu. He had none of the pensive grief in the well known portrait which is so affecting. He looked relatively ordinary. 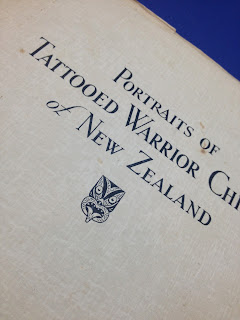 When I asked the curator if she knew if it was indeed the famous Pai Marire warrior and prophet - and murderer? - she said the image came from a book called 'Portraits of Tattooed Warrior Chiefs of NZ: The Millard Collection'.

The book was unavailable at Te Papa because something was happening in the library.

…
I asked my friendly source at Napier Library, Steve Knowles, to try and find where else I could look at the book. I was fascinated to see if there was any further context.

Lo and behold there was a copy at the local EIT, in Taradale, in a special bookcase.

This morning I arranged to go out and look at it.

The glass case was unlocked and I was given the book - really a booklet - and told I could look at it right by the librarians, where I was publicly viewable.

The EIT librarian had already told me an image of Kereopa did not appear to be there.

And sure enough, it wasn't.

But then….some curiosity awoke in me. I looked very carefully at the binding and counted only nine images where it was clear there should be ten. And when I looked even more closely, I thought I could see where a page had been ripped out.

But was it Kereopa Te Rau? I glanced at the single page introduction. It was a curious piece for both its date - 1942 - and the person writing.

1942 was a strange date for a book, as this was the time in the 20th century when it was quite possible German and Japanese fascism would triumph and the course of history changed forever.

Only Britain and its empire fought against fascism, and it was quite conceivable the battle would be lost.  After the fall of Singapore and it was clear the Japanese could reach Australia and New Zealand with impunity, NZ's army was sent to Egypt - to fight German and Italian fascism. So New Zealand was very exposed.

In this predicament, cultural items like this book would have been used to arouse
a sort of pride or interest in NZ-specific history.

It was introduced by 'Victor R Millard' from the Royal College of Art, a sculpture student.

In terms of content it would seem that the ripped out page was indeed meant to represent Kereopa Te Rau.

Millard, giving some context to the photographs, talked of tohunga in a relatively respectful way (for the period). He also said, 'Being a cannibal race, they believed that by eating the heart and brain of a dead enemy, their courage and wisdom would thus be increased.'

(An alternative version was told by Ranginui Walker on the interesting series on Lindaeur at present on Maori TV called 'Behind the Brush' (Tuesdays 8pm). He said that by eating someone - an enemy - you showed how much you despised them, because basically after eating them, you shat them out.)

Anyway, long story short, I am going to have to find a hopefully complete booklet and see whether it does say it is Kereopa Te Rau - or whether it simply says the person is "Kereopa" - which was how Te Rau was pretty much uniformly known in the 19th century global press.