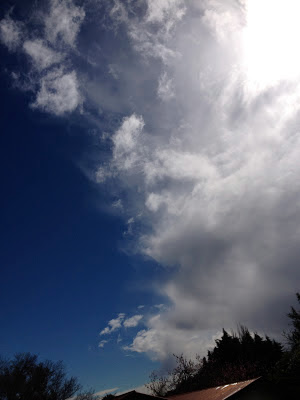 For a long time you operate on a kind of hunch. You've written books before, so you know a little about the rollercoaster of hope, which winds up to the heights before plunging down in through the ghost tunnel, wherein you encounter your fears and low feelings. But in the end, having written other books, you feel confident in the end it will work out. This is the result of spending thirty years on writing. But the point at which you feel it might - just possibly - work out varies.

With this book, which I have been researching and writing now for more two years, it's taken quite some time to cohere. It got so bad that in the end I decided to take off and stay in some motels for a while, just so I could escape my over-packed study and concentrate on what I'd written.

This was very helpful. I sat in strange rooms and just read what I had done so far.
Some of it seemed vague, some of it overloaded. But at the end of it I got a certain feeling. I felt I knew - well, that I could somehow shape it. And strangely enough I got a better sense of what the story is.

I have spoken to other authors and most say they write a book to find out the riddle at the very end: which is what the book is actually about. This seems especially strange with nonfiction which should be pretty straight forward. But 'creative nonfiction' is a bit of a weird piebald beast, being both nonfiction and taking advantage of some of the skill-sets of fiction - imagination, leaps in time, maybe even introduction of the author into the text (which is dangerous, I know.)

With this 'story' I am still shaping it, getting a feel for its kinks and shallows, views and meandering detours. But I can see going away and staying in a series of arid anonymous motel rooms helped. In fact I began writing 'The Hungry Heart' in that way - sitting at a kitchen table in a motel room in Hamilton. I began with the chapter called 'A Horse Called Caesar' and also a chapter on the marital life of William and Elizabeth Colenso.

With this current book I am struggling against a series of physical complaints - but I wonder at times whether they are simply a response to the harsh terrain of this story - its unforgiving nature. Yet probably at the heart of the story is a strong element of forgiveness - the very aspect which attracted me in the first place. This is the actions of those two heretical outsiders (in a Pakeha world) Suzanne Aubert and William Colenso, both of whom acted with a strong sense of clemency towards Kereopa Te Rau as a condemned man.

This part of the story, the silver lining you might call it, still seems a long way away. But it's something to aim for.
Posted by Peter Wells at 12:29 PM