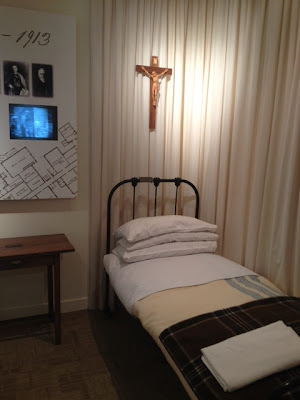 Recently I met Jessie Munro who wrote the excellent biography of Sister Aubert, 'The Story of Suzanne Aubert'. Suzanne Aubert was a feisty French nun who worked in Hawke's Bay in the 1870s , then Jerusalem in Whanganui then finally in Wellington.

Aubert was famous for her use of Maori herbs, her tending to the poor and sick and disenfranchised. She had a close relationship with Maori. And she spent the final night of Kereopa Te Rau's life in his cell, comforting him.

Jessie Munroe was taking me to the Home of Compassion where she kept her research material. This is a Roman Catholic (as my mother would have called it) place.

I had to confront my own quite strong anti-Catholic feelings. It's an interesting one. Partly it is an inherited Protestant prejudice, more a reflex really. I never knew what was at the basis of this, except difference.

In Point Chevalier, for example, I remember having a fight with a boy, the basis of which - ostensibly - was religion. (Actually it came closer to sublimated homoeroticism, on my side.) But then my closest friend at grammar was a Catholic - not that we ever talked of religion. Like many people religion had ceased to be a reality to me once I escaped direct parental control. 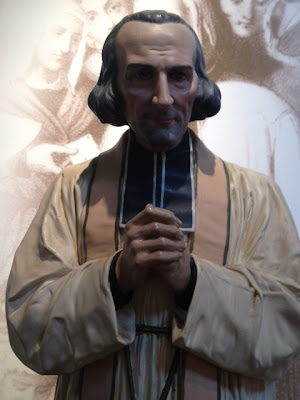 Probably it was in my twenties, when I came out, that Catholicism again became perceived as a negative force (which it has remained, due to its stance on homosexuality and other issues.) It's hard to love an authoritarian structure which is closely allied to a lifetime dictatorship. The recent entanglement in paedophilia has only emphasised the ambiguities in a church which believes in the evils of consensual sex between men but, in practice, protected adult males having sexual relations with children.

But it's more than this, something deeper. My anti-Catholicsm is something akin to racism, in the end, reflexive, 'spontaneous', unreasoning.

Yet within the Catholic church there have been some remarkable people, Sister Aubert among them. (There was also Dom Felice Vaggioli whose book 'History of NZ and its Inhabitants' is remarkably insightful for its time - although equally prejudiced about Anglicans who he saw as the devil incarnate.)

It is this sighting of the other as 'the devil' which fascinates me. Was it that they were so similar, broadly, yet different in minute particulars?  Or was it more basic - something akin to parallel corporates fighting for market share? Both promulgated myths about the other corporate and both were paranoid, anxious and fundamentally unChristian in their attitudes to 'competition'.

In many ways it's kind of like Coke versus Pepsi, but it was very real to the Christians of that time.

..
As it turned out, Jessie Munro was splendidly charitable when I met her. She allowed me to xerox a whole lot of research which she had done on Kereopa Te Rau.  This showed a generosity of spirit I have met elsewhere - been blessed with on my 'pilgrimage' by my fellow pilgrims (Ian St George with his Colenso researches for example.) I felt humbled by this and my residual feelings about the nature of Catholicism had to meet with my experience of humans who were devout Catholics and good people. In the end I was invited to stay for lunch.

While I was at the Home of Compassion at Mt Cook I looked through the Sister Aubert Exhibition. I had the uncharitable insight that it was an exhibition created in anticipation of Aubert being made into New Zealand's only saint. 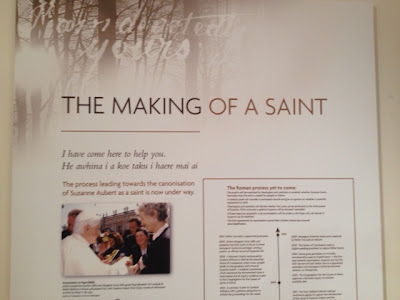 Then it would become the site of another form of pilgrimage: and the meaning of these simple items, which to me are quite eloquent, will change and become charged with something else altogether. 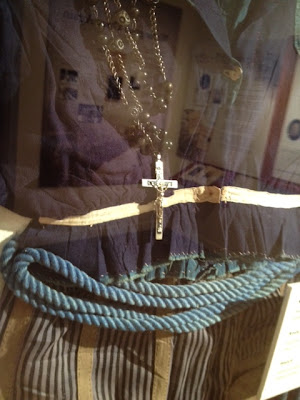 What remains with me is the modesty of the clothing, its clumsy stitching, as well as its quite beautiful colour range, from indigo blue to pink. But nothing sums up this humble yet fiery woman more than the slippers she wore on her own long pilgrimage. 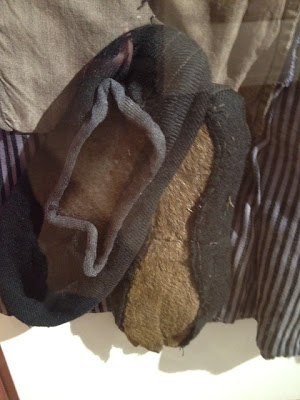 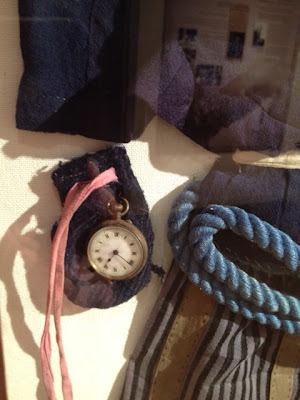 I don't believe in saints and in fact I find the whole concept faintly nauseous. If you have saints you also have to have sinners and devils.

Many people believed Kereopa Te Rau, the man most associated with the killing of the Reverend Volkner, was 'a devil'. Ironically Sister Aubert believed him to be 'the good thief' - that is, a man who had sinned but who had some possibilities of repentance and hence goodness.

It is typical of this tale I am trying to tell that goodness, the devil, and saints (considering
the Reverend Volkner was for a long time considered a Protestant martyr or saint) are on some sort of perpetual roundabout, anxiously turning into shades of darkness, before individually the characters emerge into their moment of light (forgiveness).

It seems to me that history is involved in understanding, part of which is forgiveness.

In the end it boils down to: what can be forgiven?

Are there some acts which are unforgivable?

As the "Beast of Blenheim" shows, there are still a few things which the general public find unforgivable today. At the same time it also believes in contemporary versions of saints. Valerie Adams has become a secular saint in a country to whom sport is the closest thing to a religion. So here you have a contemporary version of devils and saints - The Beast of Blenheim and St Valerie the Shot putter.

Whether there is some unreal and over-excoteable sort of pulley system in operation I leave to your imagination.