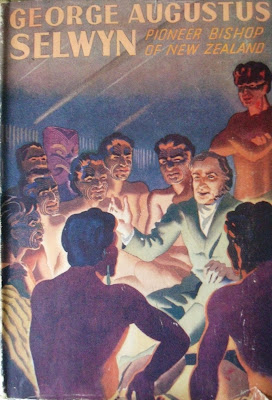 I found this cover the other day and couldn't resist buying the book. It shows Bishop Selwyn in the middle of a conversion, telling spellbinding bible stories to a clearly entranced Maori audience.

The only doubter seems to be the man standing behind him, his arms symbolically crossed. He seems to have devil's horns in his hair and he is the only one standing 'outside the circle' - the doubter in any audience.

Selwyn, dressed in clean clothing, is speaking Maori and his audience, silent and observant, are listening carefully. It could be a car salesman describing a new form of tyre.

But the light of the fire suggests something other. Light stands for illumination, understanding, belief, knowledge while the encroaching darkness represents lack of Christian knowledge, the darkness of 'barbarism' or traditional beliefs.

So it is a heavily coded message, in some ways laughable, in some ways touching in its naivety. (It dates from the 1940s, when things seemed 'simpler'.) 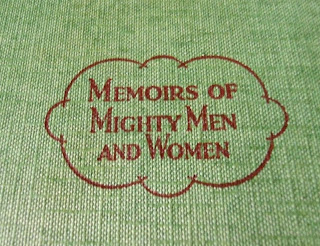 Bishop Selwyn was seen in many different ways in his own lifetime. 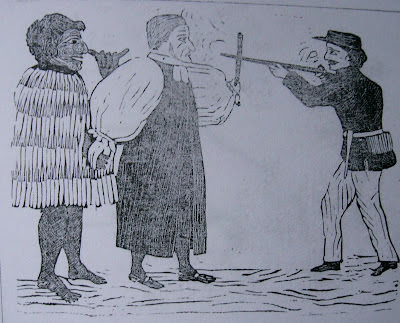 This is a cartoon dated 21 November 1861 and is from the Taranaki Punch. In it Bishop Selwyn with his well known profile and hooked nose, stands in between a Maori (who literally thumbs his nose) protecting him from the soldier trying to shoot him. It is during the NZ Wars.

One of the interesting things is the way a cross is formed by the rifle and a baton the bishop is holding - but the cross is in an ambiguous area - right by the gun of the soldier.

Selywn got too close to colonial and racial politics.

'Oh, how other things have changed!' Selwyn wrote about this time. "How much of the buoyancy of hope has been sobered down by experience! When, instead of a nation of believers welcoming me as their father, I find here and there a few scattered sheep, the remnant of the flock which has forsaken the shepherd!'

It was dangerous being a shepherd on his own, distrusted by both sides.

Below is a Maori cartoon but again it shows Selwyn as being in the middle (this time of two devils, both representing Governor Grey.) 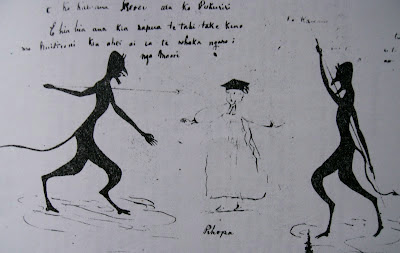 The killing of the Rev Volkner in March 1865 was a crisis for the Anglican church and for Selwyn. The church knew it would arouse the fiercest reaction from Pakeha people - as Volkner himself sensed and knew as he was being led to his death. His death was a political disaster for Maori, almost a form of political suicide.

Selwyn again tried to speak up for Maori - at a time of extremely heightened feelings. He was accused for being an apologist for cannibalism and laughed out of the room. 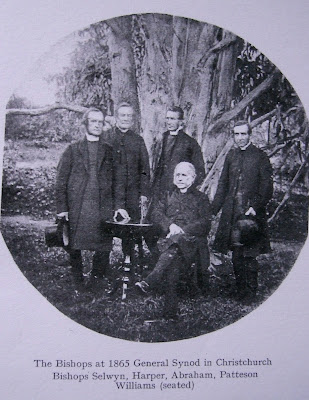 Above is a photo of five churchmen immediately after Volkner was 'butchered' as the press put it. They were men in a state of acute trauma.

Volkner's death broke a fundamental tapu which had been in place ever since Christianity had come to NZ: a missionary was to be protected and treated as a man of peace.

A corner had been turned.

In the photo above Bishop Selwyn, who was clearly a short man with a powerful physique, stands at the extreme left.

He had got on a boat immediately he knew of Volkner's death and went immediately to Opotiki where he tried to negotiate the release of the Rev Grace, who had been imprisoned alongside the Rev Volkner. Then Selwyn moved on by ship to Poverty Bay where Bishop Williams was also facing eviction by the Pai Marire, or Hau Hau.

It was the end of an epic, of an endeavour.

Nothing would be the same again.

Bishop Selwyn would go back to England with a palpable sense of failure.

And the man to the right in the photo above, Bishop Patterson, he would go off to Melanesia and meet the same fate as Volkner.

Nothing would ever be the same again.

And the beautiful optimism which this book cover tries to evoke vanished...like a puff of smoke. 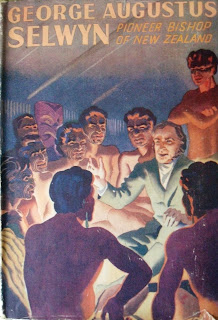