'Time flies, and we are borne away on its wings to eternity.'

It seems like I am haunting churches at the moment, which is strange as I don't identify myself, on the whole, with religion. But I guess it is inescapable, as I trace the Rev C.S. Volkner's journey towards meeting Kereopa Te Rau in March 1865 in Opotiki.
My most recent excursion was to look at papers at St John the Evangelist's College, in Kohimaramara in Auckland. I have lived in Auckland all my life, apart from the past six years and during that time I often drove past St Johns. It was the training grounds for Anglican ministers from 1845 onwards.
It always seemed mysterious - other. 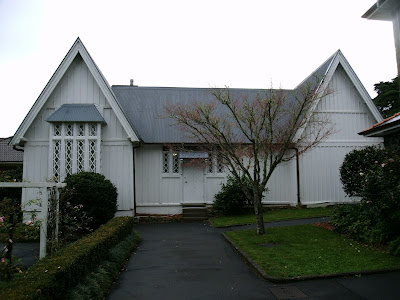 Separated behind large grounds it had a noli tangere feeling - look, don't touch. I was brought up at a time when there was a 'natural' deference to people like bishops and St Johns seemed to be steeped in that sense of exclusivity. You felt if you walked in you mightn't know how to do something, like fold a napkin, or sit when you should be standing.
It also had the gravitas of age. 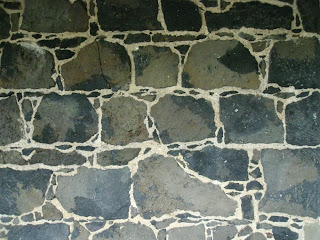 Now I found myself going in through the gates. It was Auckland in winter - constant showers but a residual feeling of humidity. I was struck by the beauty of the three vast macrocarpa trees which were on 'the front lawn'.
Macrocarpas are regarded as rubbishy trees these days. Nobody would think of saving them. But to me they evoke the struggles of early Pakeha life here.
People used them for shelter on landscapes stripped of other trees - the native forest. They were sturdy and hardy. They could even be cut into a velvety hedge. Something of their raw gaunt beauty seems to be of this place - of a hardy people who survived and then flourished in islands of daunting severity. 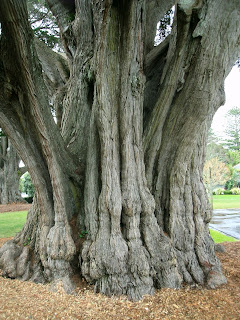 I liked the trunks especially. They seemed like elephants feet. It was great in a way to see these behemoth's survive.


Later in the college's elegant library I found myself reading Volkner's sermon which weirdly seems to foretell his violent death.
'He suffers but a short time, and though his sufferings be ever so trying or ever so painful, the comfort remains - they must end.'

'What loss is it to him if they kill his body? They only release the soul, which they cannot kill, from this poor tenement of clay. Could it be called a loss, if they took from him this transitory life and God gave him an everlasting life instead?'

I felt a shiver pass down my back.

Earlier when it was raining I had hurried into the open door of a chapel. Immediately I was impressed by its dense atmosphere. It was so very dark, it felt like a coven, fabulously mysterious and full of atmosphere. 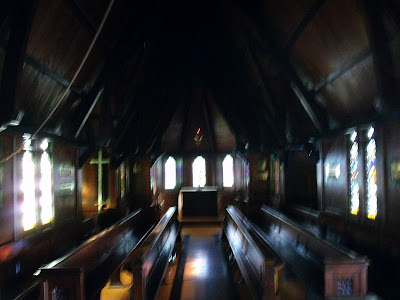 Considering New Zealand's genius for banality and mediocrity - its suspicion of 'atmosphere' and absolute indifference to patina and the beauties of real age - the interior seemed extreme. The stained glass windows were gem-like and altogether I felt I was somewhere special. 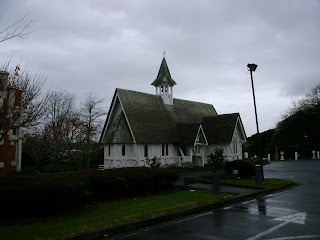 Later the bell would be rung and people scurried through the rain to attend a service. (These were the new Anglican ministers, from all over the Pacific. I felt a link with Bishop Selwyn's far-away days of the 1840s.)

But what made me feel the tension of history, its hidden webs and interconnectedness, was this: I was sitting in the library reading Volkner's weirdly foretelling sermon: and just a short walk away was the very chapel he had delivered these extraordinary words.

Later I went into the chapel again, and looked at it through the eyes of that sermon. 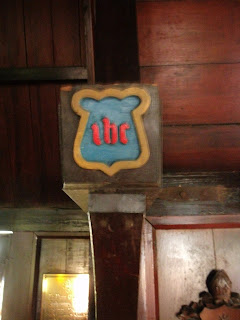 It was not unusual, in one way, for evangelicals (let's just call them religious crazies) to
look forward to a fiery death. Their idea of God was not a beautiful lover with whom one had the ultimate orgasm as you broke through from death to eternal life.

Their God was somehow an angry father, a kind of ultimate traffic cop who stalled you at a kind of drink-drive shutdown and then directed you into a punishing holding pattern, or maybe even the ultimate disgrace - your soul was put into prison for all eternity.

Alternatively you could go to heaven.

Heaven for those young men who were Muslim terrorists was peopled with a six-pack of yearning virgins. Heaven for the hard working evangelicals also had a kind of beauty: it was all freedom, all luxury, all pleasure (though not in a sexual sense of course. I think everybody slept in single beds in Heaven.)

But being sacrificed, being a sacrifice wasn't all bad news, just as for certain sort of Muslims it represents the highest of honours - a way of being chosen. Or is that Chosen?

'What loss is it to him if they kill his body? They only release the soul, which they cannot kill, from this poor tenement of clay.'

I looked at amazing pulpit on which people gave sermons. It has some of the inexplicable (to me) terribleness which seems to lie inside the Christian message. 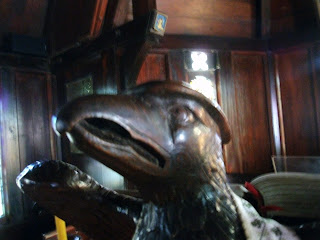 (That beak, those claws.) Why? 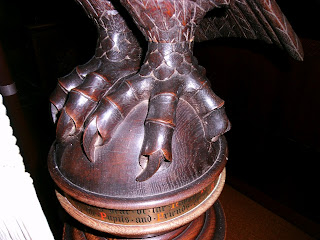 (Later I found the pulpit was given to the chapel at a later date than Volkner, the 1880s.)

But standing there, in that coven-like darkness, I felt Volkner's presence - his being, his audience, his natural amphitheatre. It did not seem a strange place in which to announce you had thought of joining a millenium-old queue of apprentice-saints.

'Time flies, and we are borne away on its wings to eternity.'

All on a rainy day, in Auckland, with the faint sound of tyres suctioning on tarmac out on the busy road.
Posted by Peter Wells at 6:14 PM