A novelist on oath


I was up in Auckland and unexpectedly I had a window of three or four hours. I jumped on a bus and headed off to the Auckland Museum Library. I was unsure what I'd find there specifically, partly because I had left my notes back in my hotel room. But I knew that they had copies of some important letters by the German missionary Carl Sylvius Volkner.
The bus swept past Kinder House, Ayr Street, in Parnell. I suddenly felt this incredible itch to go and have a closer look. (John Kinder was an Anglican teacher, watercolorist of great subtlety and photographer. He also knew Volkner.)
Kinder took this photograph of Carl Sylvanius Volkner below and it may even be Kinder's identifying handwriting. (The photo is in the Alexander Turnbull Library.) 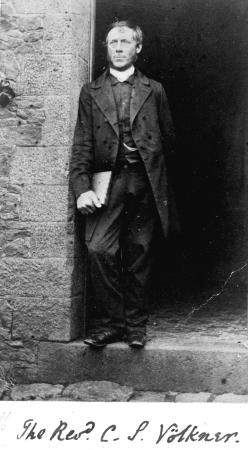 What fascinated me was trying to place the photo in a context. When I had initially looked at it I thought it might have been taken in Europe. (Volkner came from the same town as the Brothers Grimm….)
That kind of stony look is not common in Auckland, or the North Island generally. Then it occurred to me: perhaps it was Kinder House? It was made of stony flinty pieces of rock.
I pressed the bell on the bus, got off. I had my camera with me. I began to take photos of the main entrance doorway. 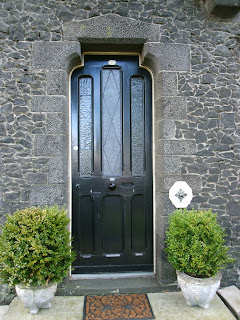 I didn't have the Kinder photo to match up, so I decided to take some details of the great bluestone blocks by the door. I felt this was the door in which he had been photographed. 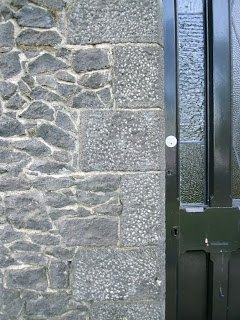 It all seemed possible. Kinder was married to the daughter of Rev Brown of Tauranga. Volkner worked with Brown at Tauranga for quite some time. Volkner was also interested in education and like Kinder, functioned as a teacher.
I was on a roll.
Off I went into the library. I felt speedy, almost as if I was coming down with something. I looked up 'Volkner' as a general search and identified something key - absolutely key.
This was a series of letters Carl Sylvanius sent to Governor Grey outlining the movement of 'rebel' Maori tribes through his parish. It even included a map of a pa.
It was allegedly because of these letters that he was hanged as a spy by Maori 'rebels'. (Though how did Maori in Opotiki know of these letters marked 'Private'? Were these letters hand delivered? At the 'trial' following his death - a curious reversal of what normally happens - he was called a spy but there was nothing actually said about letters, as far as I can find. Historians later found the letters and displayed them as evidence.)
But something came up which also interested me. A series of photographs of CSV from within Kinder's photo albums.
I asked to look at these. The expression on the woman behind the desk changed from what kind of pest is this to a sort of radiance. She had just put a photo of CSV online the day before, she said. The coincidence seemed amazing - a kind of symbolic meeting at a crossroad.
Pilgrim to Rome.
My few hours in the Museum Library were like that. I kept quickly discovering a lot of things. I thought to myself it was like coming on a laden apple tree. You gave it a few good shakes and the apples fell all around you. Plump for eating.
Yet other times, researching is a long hard road…and you don't seem to find anything fresh.
...
Long story short, though, when I carefully compared the pattern of stones round Kinder House door, they didn't seem to match at all those in the photo of CSV. I began to feel I was barking up the wrong tree.
(It was complicated by those twee box hedges in pots, which deprived me of a sense of scale.)
Then I suddenly had a thought. I counted the number of small rocks inset by the second big stone from the top of the photo. I scanned the historic portrait...and suddenly the scale fell into place and it was revealed as the door against which Carl Sylvanius leant....150 years ago....
It also allowed me to actually measure his height, a not unimportant detail.
I need more time to test this hypothesis. And I guess this is what any sort of research is based on - wild surmise, sudden intuition - tested against whatever hardness of fact you can find.
Michael Holyroyd, the great British biographer, says a biographer is a novelist on oath. I do believe that. The 'on oath' part is very real - otherwise the fiction writer would take over.
Posted by Peter Wells at 8:35 PM