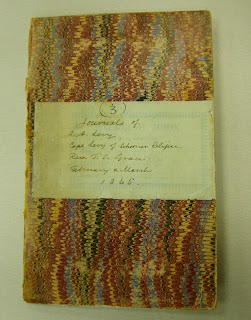 At the moment I am looking at the reports of the Reverend Carl Volkner's death in March 1865. He was hanged and then beheaded at Opotiki outside his church by….
…and here one enters controversial territory. At the time news reports in the Pakeha press were very certain of what happened. 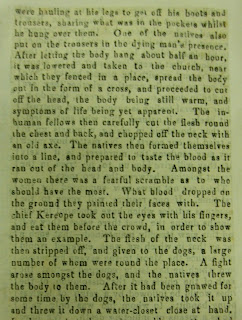 The story was a Hau Hau emissary Kereopa Te Rau had arrived in town with a hiss and a roar, stirred up the locals no end and in a froth of fanaticism turned them round on a sixpence and got them to participate - either passively or actively - in savagely killing their one-time beloved minister.
But the story is actually a lot more complicated than that. And since Kereopa Te Rau's imprisonment in Napier over the Christmas of 1871 is the core of my story I have to look into his participation in this crime very deeply.
The only trouble is…it gives me grief. I have spent some uneasy nights, doubting whether I can work out a strategy for telling this story. The horrible goriness of it makes me nauseous. I sometimes feel I am trapped in a cinema on my own in the middle of the night, forced to watch a snuff movie.
Forced?
I put my head in the noose by offering to tell this story. But which story? As always with a writer, you have to carefully choose what story you are telling. But since it is living history, to a degree - its after effects are still being worked out as I write - I need to know as much as I can, about the territory.
At times I have wished to let the story go. Could I tell it in fiction, or as a play? I have felt confused, ambushed, exhausted. Yet something else always kicks in. Call it curiosity. Call it the need to complete a puzzle.
I also rely on the fact that I didn't know 'how to write' the Colenso book until I fell on what now feels the only way I could have written it (the dual focus of me in the present trying to work out what is what, and an immersion in the past.) I am unsure whether this is the way to tell this story. What story?
But when I went into the library just before to xerox an account of how heads were steamed and dried in the early 19th century (which is in the forward to Stephanie Johnson's novel, 'John Tomb's Head') I saw a new book on the NZ stand. It was called 'For Gallant Service Rendered' by B.Mabbett and it looked at a Pakeha who fought against Te Kooti. It said the enticing words: drawn from private diaries.
Instantly my curiosity was pricked and I picked it up and looked down the index.
Te Rau Kereopa featured quite a lot and when I flicked to a double-page entry I found information on what happened to the chalice from which Volkner's blood had been drunk.
Immediately I decided I needed to see this object. I would be driving up to St Stephens Church Hiona (Zion), which was Volkner's church in the next fortnight. I had hoped to go up via Gisborne, so that I got a sense of the geographical space within which Kaiwhatu (the Eye Eater) hid. But the rain has been so incessant that there are slips, roads are closed. So I will go in via Rotorua…which is where Te Rau Kereopa's tribal affiliation come from.
I hope to go there one day. I am very interesting in here Te Rau Kereopa's side of the story.
I have to rely on my curiosity and the magnetic force of physical objects, spaces…and finally, people. Is there anything new to say? Volkner's death was one of the great Boogeyman stories of the Pakeha past - a warning story, a narrative which seemed both inexplicable and attractively doom-laden. Can it be made explicable? New?
And can I find my own story?
Posted by Peter Wells at 5:13 PM