A pause in time 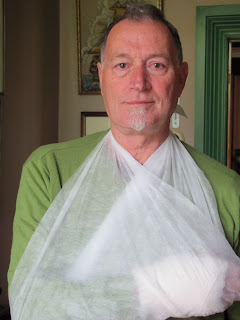 I had a week's invalidism after my carpel tunnel op. I spent it lying down reading Sarah Shieff's wonderful new book, an edition of Frank Sargeson's letters. You have to be careful with recuperative reading. It needs a kind of trash/chocolate/easy reading quality - and to start with I was uncertain whether the letters of a leading NZ writer from 1940s would be, like, hard work.

But like all true letters, they are a lovely mixture of gossip, heartfelt inner thought shared with a trusted intimate and...shopping lists. I sped through to the end and wept when I finished it.

(He was a funny little man, very human, and talented. He blazed a trail - he was really the first major writer in NZ to stay here and not try and position himself in London, or Sydney, or wherever. This was way more important than it might sound.)

I met him and we became friends briefly. There is a letter to me in the collection. Even odder, to read about yourself in the third person in another letter to someone else. (Fortunately it wasn't malicious or unflattering, both of which Sargeson could do in spades. And of course this is what makes the letters such a good read.)

In a way it was the rare conjunction of a then-young man at home with gay liberation, as we called it, and an older man who had spent his life closeted after a terrifying arrest for homosexual offences when it was harshly punished by the law. We passed by each other briefly and I was deeply grateful.

At that time I was relatively unpublished and haunted with the thought I had mistaken my vocation. To meet and talk with such a well established writer, who had made a living against all the odds, affirmed my 'life choice'.

I will never forget his pleasure in taking me to a bookshop window and pointing out his latest book in the window.
At that time I thought: here's this incredibly important man who is central to writing in NZ - but he's chuffed as a kid by seeing his book in the window.

It's been good to have a break from my researches. You can wear yourself down like a plough-horse going round and round in circles.

Now I've been away from it all for about a fortnight and I feel I can go back in re-energised.

And my hand has healed beautifully...