Through the carpel tunnel....a distant view

29 January 2012
I felt dispirited. The low level but constant pain in my hand was getting me down. I couldn't type much and even to hold a book was difficult. I decided to go and see if I could find where the best old photo of the prison (1876 - F William's album) was taken from. It was clearly from another hill. 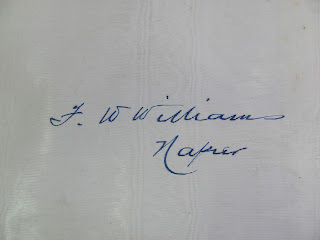 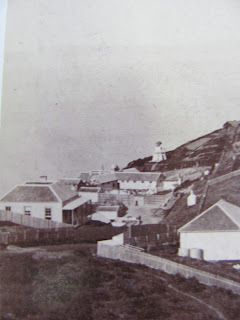 (Prison is in mid-ground, between lighthouse and villa to upper left.)
It was raining hard and surprisingly cold for January. There was a Southerly wind blowing in. I drove around the fascinating little streets of Napier Hill. I have to admit I have a great love for Matarouhoe - Napier Hill - Scinde Island, whatever you choose to call it. It was so prominent a landscape feature that Cook wrote about it in 1769, choosing a name which still lingers - bluff.
What appeals to me about the Hill is the way it is so honeycombed with stringy little streets, lanes, wedges of steps. Everyone was pretty much forced to live on the Hill until the 1920s when the plains were drained, and then of course the great 1931 earthquake when the land rose up. So although Napier only dates from the late 1850s it has a sense of a complex organism of a much larger town or place.
The streets I drove up were actually no more than lanes. It is not uncommon for these streets to say, at their beginning, 'No Exit and No Turning Point'.
One wishes this sign could be put up for all armies as they marched triumphantly out of their home cities.
It was hard to even turn the car around. Basically you had to drive into people's front yard and reverse out. A dangerous procedure if there was any traffic. But, it being a wet Friday afternoon and it being Napier, there was no traffic. I worked out the photo could not have been taken nearby. The angle was all wrong.
I followed my nose and drove over to Bluff Hill, the posh suburb on Napier Hill. I cut down Elizabeth Street, with its houses all beautifully painted and gardened. This wasn't right. I took another street - Priestly Terrace. I noted it had some steps going down the street below.
I suddenly glimpsed across the valley and saw the prison. This is where I thought the photo had been taken from. I turned round and drove back. I looked down. Stupidly I hadn't taken my camera. This was all part of my being low in spirits, and almost apathetic.
But suddenly I felt enthused. I was on the right trail. Or at least, I was on some sort of trail….
I would bring my camera back.... 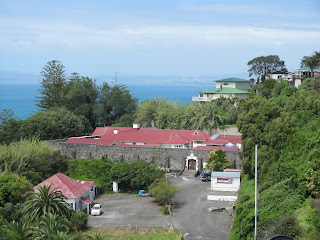