The sound of waves... 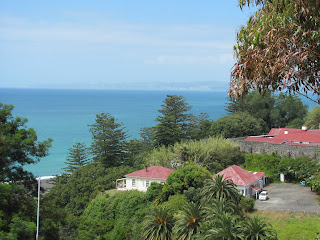 There's something about that particular area, by the Napier prison. It is like a pair of cupped hands held up to an ear.
The concave hills - the way they are arranged - catch the sound of the waves and echo them back so the area is rich with sound.
It's like the immense monster of the sea is peacefully, rhythmically breathing.
I've always loved that about living on Napier Hill. At certain times, depending on which way the wind is blowing and how high the sea is, you get this beautiful silvery commentary.
The air seems to rustle and crackle. At night in particular it seems magical.
I don't know what it was like for the prisoners - hearing this rhythmic sound. Did it remind them of the great natural world - from which they were debarred. Did it then become monotonous, a reminder of everything they did not have? 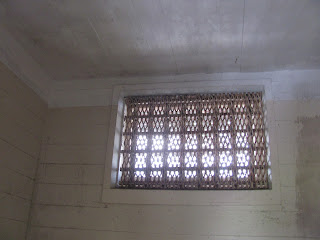 Did it creep inside their ears at night and whisper things?
Calm their spirits - or agitate them?
According to the prison, the site was important for Maori astronomy and had high mana. But this information is uncredited and oral history has a way of being as...stretchable as chewing gum.
Pakeha history, being written down, tends to be more exact (and hence more easily forgotten, since it is nobody's burden or role to remember it....)
Instead of astronomy - looking into the stars and the infinite - the first known Pakeha name for the area was 'slaughterhouse reserve'.
That is, one would look downwards into the entrails of animals, blood, guts and killing.
It has just occured to me. Is this my role here in particular: the burden of remembering?
....
Yet over both and before each.....the eternal silent commentary of waves...