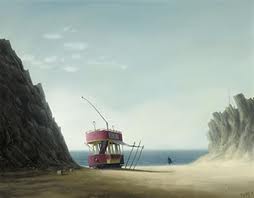 Felix Kelly was the delightfully fey artist whose painting evoked a kind of neo-romantic sense of discomfort with the present and a delight in ruins.

It made sense: he was making art in the 1930s and 1940s when the European world was going to hell in a hand basket. He was, oddly enough, a New Zealander.

He spent most of his life in London. In one way he was a refugee. New Zealand in the 1930s had little space for artistic homosexual men and women and anyone who could tried to get out to the places like London where there was a subculture you could live within.

There were women like Ngaio Marsh who was a lesbian in London but officially either sexless or heterosexual in
Christchurch.

Kelly left and as far as I know never or rarely ever came back.

The image above is one of my fave images from Kelly's art. It is a quick sketchy painting he did for a favourite neice. (It actually has prettier colourings in the original.)

It is set on a West coast beach out of Auckland. (Kelly grew up in Remuera and his art continued to show NZ icons in strangely odd settings.)

What I love about it - apart from its compositon - is its sort of signposting - a wrecked tram somehow sits on the beach. But a canopy has been put up to one side....so someone is living in the carriage.

Aotearoa New Zealand is the end of the line in many ways, both bad - and good.

Here it is picturesque and arresting. 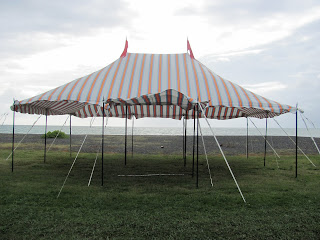 I was reminded of Kelly on Monday morning when I went for a walk.

It was the morning after the night before.

Art Deco weekend, a kind of orgiastic event to do with costume rather than sex, had just ended.

This rather lovely tent had not been taken down.

Nobody was around and rain was about to fall.

In fact as I took these photos the first big drops began to fall. 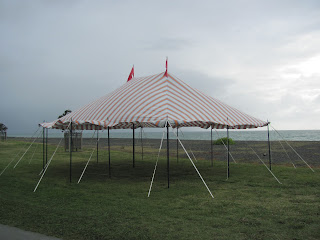 Living at the end of the line suddenly appeared....eloquent.