Lying fallow. Needing to lie fallow for a while. In December I realised I needed to just stop writing. But the fact was I felt miserable not writing. As usual my personality fell apart. I was overwhelmed by discontents.
So I began a small project: a riff of a kind on the 'Clive Memorial' on Napier's main boulevard. The words 'Clive' and 'memorial' of course act as a negative here. One expects something stiff and archaic, about a best-forgotten imperialism. As for the word 'memorial' you can sense peoples' eyes glaze over. 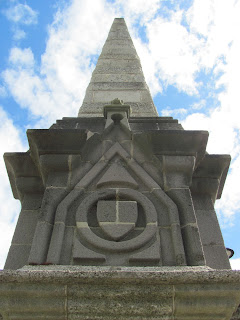 Somehow I shook a story out of the handsome - ignored - memorial and totally enjoyed myself. (Memorials are always ignored - for most of the year anyway. But this is their purpose: to hold a story fast, to embed a narrative in stone. Will the story mean the same thing to future generations? Aren't you running the risk of the story being interpreted entirely differently? Yes. This is the risk. A huge risk. Monuments sit face to face with hubris, really. Put it this way. Hubris is the invisible shadow.)
In the end I managed to write a piece which referenced both Lady Gaga and 'a man named Flo'. (See this atVolume I No 8. http://napierathenaeum.com/)
Note: I developed carpal tunnel syndrome in my right hand just before Christmas - obviously I should have stopped writing - so these blogs will be scarce for a while, until I sort this out. I guess one could call this….enforced rest.
Posted by Peter Wells at 9:45 PM