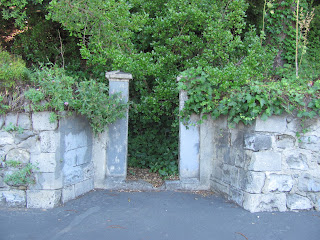 11 Jan 12
The strangely disused gateway to the Napier Prison which, like all overgrown entrances, has an improbable romance.
It is weirdly narrow - yet shows some signs of careful construction. Was it an alternative path from the Parade up to the Napier prison (and asylum which for tidiness sake was put right next door?)
Neither of them is used now for its original function, hence the pleasing decay...
I looked at the sign advertising 'historic' prison tours. 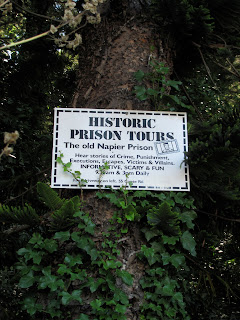 The run of words 'hear stories of Crime, Punishment, Executions, Escapes, Victims & Villains' seemed breezy, aimed at the tourist market. (When I looked it up online www.getnicked@napierprison.com I found this image advertising late night tours of the prison...) 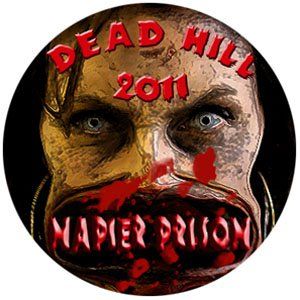 'INFORMATIVE, SCARY & FUN,' the ad tacked to a Norfolk Pine said...
I know when I do guided tours of the Napier Hill Cemetery some people feel shortchanged when I talk realist social history (lack of penicillin, death in childbirth) instead of clanking chains and that old cliche of the graveyard - ghosts. I don't believe in ghosts.
However I do believe in - presences.
This is maybe what sends me off to look at 'original sites' - places where things happened. 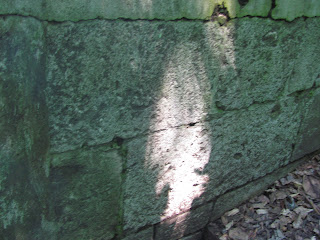 I looked carefully at the stonework which seemed neat and old. Inside the gate posts, which obviously had a gate at one point, there were some beautiful almost classically oblong blocks of stone. Were they made by prison labour? And was this labour used to creating the required stone shape for classical buildings in prison-cities like Sydney or Hobart?
And then there was the track…. 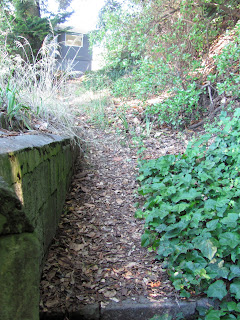 It skirted a business premise and I felt a bit wierd just walking up an unused track. It was the usually the mark of
someone up to no good. I decided instantly I would return tomorrow with my camera. It would authenticate me.
Instantly I would become 'a tourist' - one of those strange people entitled to photograph things which locals regard as banal and not even worthy of a second glance....
….
When asked in social situations 'what is your next project' I fumble it.
If pushed I say the word 'Volkner' to see if that creates any glimmer of recognition.
Occasionally I will say 'Kereopa Te Rau'. Usually there is no return of interest.
Today I thought I need to set the scene. 'Have you heard of the Rev Carl Volkner who was hanged in Opotiki in 1865 then beheaded and his blood drunk from his skull. A Hau Hau warrior prophet called Kereopa Te Rau ate his eyes and became the most notorious man in (Pakeha) New Zealand….'
But when I try and minimise the narrative to my real interest - two Pakeha of sensibility, essentially dissidents, standing up for him and trying to offer comfort to him in his last hours - it becomes even more difficult to soundbite.
I usually end up apologetically mumbling in a downcast way - 'it's a little bit blood stained'….'it's like Macbeth'..
Partly this is the writer's inability to believe that the project he or she is starting out on will ever eventuate. But it is also the desire to keep in the dark…those first tender shoots. You want to shade them from the harshness of the overhead sun.
....
What I want to write is the 'biography of an event'…
Posted by Peter Wells at 3:54 PM