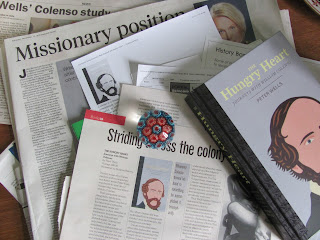 I have been incredibly lucky. Or something. But  - so far - touch wood - I have had excellent reviews for ‘The Hungry Heart’. This began with Geoffrey Vine in The Otago Daily Times giving me the best review I’ll probably ever have in my life. I wasn’t sure if this was the one ‘good review’ so held my breath. But the positive reviews just kept on coming.
I said to a writer friend the other day it is amazing - the ability of the writer’s eye to sprint down a column of print - in a review - to pick out the adjectives.
This is fine when the adjectives are good, but in a writer’s life, you’re unique if you don’t have bad reviews or indifferent reviews or even, at times, malicious reviews by people who hold a grudge against you on some other ground (their career isn’t going so well, you didn’t smile at them when they said hello. It can be anything.) Or maybe even your work that time wasn’t so coherent - despite all your best efforts, it doesn’t quite work.
Like some miser I have tidied away the good adjectives and in private I caress them. They seem some kind of incredible luck - because the truth is I haven’t worked any harder or more carefully on this book than other books I’ve written.
Some things hit the zeitgeist. As I saw on the back of a van the other day ‘timing is everything’ (I didn’t notice what it was advertising.) It was at the lights. The van drove away.
But here’s the thing. If I am going to accept these good adjectives - ‘warm’ ‘exhilerating’ - ‘gripping’ - I have to accept the truth of the bad adjectives.
Isn’t that a fair deal?
But the fact is to survive as a writer, as an ‘artist’ (I hate this word - ever since rock stars became artists it seems the wank factor went through the roof) - but as a working writer you need some sort of defence system to sustain you through the hard and lonely grind of producing work. In the past when a bad adjective arrived I always thought: they just didn’t get it. Or: the book isn’t for them. It takes a long time for me to accept some of the truth of the criticisms. Besides, the fact is during the writing, there is almost nothing you haven’t berated yourself with at times. Self doubt. Exhaustion. Moments when you turn off the project.
So when the bad adjectives come you feel curiously exposed. Publicly exposed.
As for the good adjectives...well, this is sort of like a dream universe in which suddenly ‘everyone likes you’.
Caution.
I’ve seen ‘Carrie’, Brian De Palma’s 1976 film...I know one minute you think you’re the prom queen and the next.....
Posted by Peter Wells at 11:29 AM