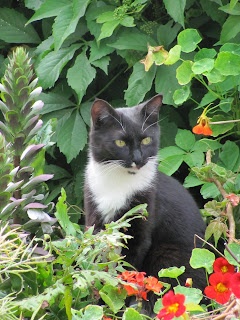 This is a picture of a cat which was, last night, lying apparently dead in the middle of a road.

Her name is Narky, the derivation of 'narcoleptic' as she has a defence position of apparently falling asleep in your arms. She was one of two stray kitten Douglas and I adopted after my cat died last year. She is one year old.

When someone knocked on the door at half ten last night and asked if we had a black and white cat - one had been hit by a car and was lying on the road - we ran outside and to our horror, it was Narky lying very still. She lay on her side, her legs stretched out and she was right in the middle of the road.

She appeared dead. Douglas brought her inside, wrapped in a towel. He was crying bitterly. I went to call a 24 hour vet. Suddenly she awoke. She licked Douglas's fingers then got up and - startlingly - ran away at high speed. This was followed by highly erratic behaviour - vertical climbing of curtains, jumping at windows in an attempt to get out. She showed no sign of any recognition of us and had reverted to blind animal behaviour - just as humans do in certain situations.

A 24 hour vet - we drove out in the ghostly silence of a town asleep - felt all over her body, her limbs, her skull, her jaws. Her eyes were looked into. Astonishingly she had sustained only the injury of a broken incisor and lacerated gums.

The vet, a pleasant young woman, said we should buy a lotto ticket.

Narky today displays all the joy of an animal, human or otherwise, delivered back to life after a life-threatening experience. She wanders along, her tail lazily thwacking, purring and sniffing things. We kept her inside but she managed to get out and this is where I took this photo: she is sitting on top of her favourite place - the compost heap.

It is hard to keep proportion on these situations, but what is the correct proportion, I wonder.

Memo to self: buy a lotto ticket.
Posted by Peter Wells at 4:28 PM