24 Hours: Panic attack, remove all traces of history, then we can relax.... 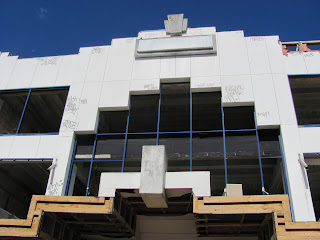 1980s art deco bites the dust in Napier. It didn’t last all that well. This was a building designed during the resurgance of interest in Napier’s genuine art deco architecture which was all built following the disastrous earthquake and fire of February 1931. 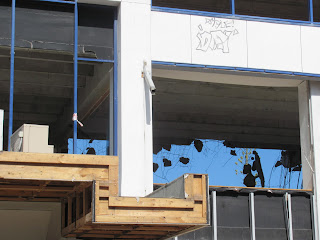 This postmodern building is being demolished, not for aesthetic reasons, but because Farmers wish to erect a contemporary building on the site. In turn this will require the demoliton of some rather sweet examples of small town deco - at most their facades will be integrated into a 2012 building. Facadism - the compromise of the 1980s - strikes again. 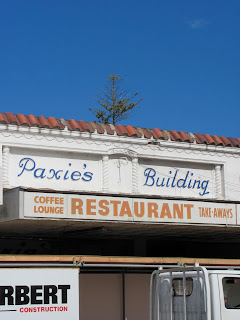 (Paxies was the cool hang out place in the 1950s and 1960s when it had an espresso machine and was run by a Greek family. Probably when you landed in Napier it was the one place to get something decent to eat. Vale culinary history...Greetings facade...)
But there is a looming crisis for all of art deco Napier - and every old building in New Zealand over two storeys in height.
Ironically, or not so ironically, this was brought about by the subsequent Christchurch earthquake of this year.
This has led to a panic attack among planners and people charged with making buildings safe.
Now everything in NZ above two storeys will have to be earthquake strengthened to astonishing degree - way beyond, for example, Los Angeles.
It is hard to work out the degree to which a sort of hatred of old buildings is behind this (or simply aesthetic blindness, a numbness to issues of heritage) - or just plain old fashioned panic disguised as 'practicality'.
The Billy Bunterish commissar of Christchurch Jerry (built?) Brownley has a hatred of heritage. He described Christchurch’s sometimes amazing old architecture as a collection of ‘dungers’.
He is an adult man reduced to the intelligence of a boy delighted by a grader.
Old Christchurch has vanished.
There was little debate, little questioning.
Understandably the people of Christchurch, suffering a terrible trauma, have been incapable of mounting a defence of their own past. (Let's face it, they can't even get into the central city zone.)
This is just the sort of populist exploitation of a situation in which people quite genuinely feel fear that is most reprehensible.
Now we have its coda: earthquake strengthening which is so over the top nobody with an old building will be able to afford to keep it, so the only viable response is  - demolition.
Already, in the past day, we have seen a series of buildings declared unsafe and people given a slim 24 hours to find alernative accomodation. (Even though the planners knew for a long time it was distinctly possible this might be the outcome. And we are talking of major civic buildings - courtrooms.)
All this spells panic underwritten by a distaste for heritage.
Duncan Fallowell when he came to New Zealand and wrote his subsequent ‘Going As Far As I Can’ talked of his shock of seeing photographs of our Victorian cities: shock because they were so handsome.
Many of these buildings were however constructed without any notion of the reality of earthquake so they need strenghtening.
But the question now is very stark: will Aotearoa New Zealand have all its built history scraped off its surface?
I have always been intrigued with Pakeha who had the astoundingly novel idea that humans can live without a sense of their own past. There has been no race in history which has pioneered this point of view - that is, any cultural group which has survived. Maori of course understand entirely how integral the past is to survival. It’s the compass you use to guide you - invaluable when you feel you might be lost.
We are about to throw away the compass.
There is no doubt there need to be hard questions asked about safety and buildings. But the questions need to be the right ones. We need more information about how other societies on the Pacific Rim face parallel situations. We have lived in these buildings, some for over one hundred years.
Over reaction is as dangerous as under-reaction.
Over-hasty decisions cannot be revisited.
Once a building has gone it has gone forever.
We are at the beginning of another step into a very dangerous void - in microcosm art deco Napier could be demolished as either unsafe or too expensive to make safe.
But you have to widen this out to take in just about every pleasant building in every small town and city in New Zealand - anything which smacks of character, of place, of a continued existence in these islands - outside of a prefab. 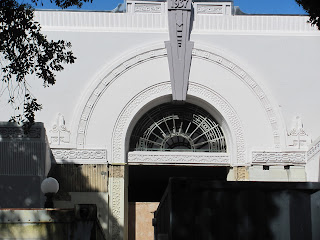 (Hawke's Bay Museum and Art Gallery, designed by Louis Hay and opened in 1937, a long six years after the 1931 catastrophe.)
Can we expect John Key to contribute anything to the dialogue? I doubt it. His granting of carte blanche to Jerry-built Brownlee in Christchurch - Key’s own home town - indicates he has no interest at all in a careful working out of the difficult problem of creating safe buildings and keeping a hold of the compass.
24 hours. This is our crisis.
Posted by Peter Wells at 11:49 PM