When I was a child there was a washing agent called Rinso. It  had a tag line which was sunshine white, sunshine  bright.
This was my thought last evening when I went along in the gloaming to see what progress, if any, had been made on cleaning WilliamColenso’s headstone and grave for the bicentenary celebrations.
I had cheekily asked the Mayor, Barbara Arnott, if the city council would pay for the restoration. I did not hear back and thought the plan had come to nothing. But it turned out the Mayor was on holiday. She graciously granted my request.
Kim Stops from Headstone World Hastings, who is the best restorer of historic graves in NZ, was given the job and hey presto! what did I see but a magnificently cleaned up monument. 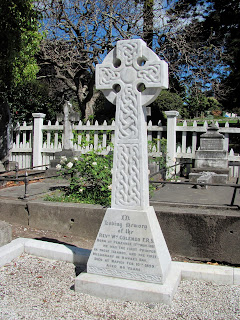 I had no idea the old marble could emerge so pristinely white. The veins in the marble were lilac like the throat of a pigeon. The lead-lettering had been restored and the overall whitening has made the words legible. 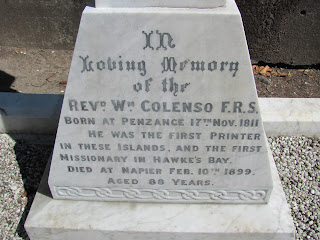 I was thrilled and came back this morning to take some photos. 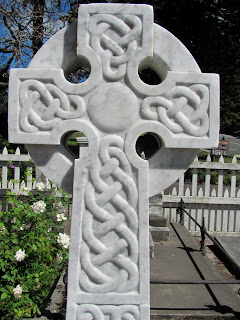 It occured to me there was a kind of symbolism in both this cleansing and whitening. Reputation, dirty linen, teeth.
For a man who has been mired for so very long, it feels like a fitting thing to do.
And I could not help but feel the ‘Old Solitary’ himself would be secretly thrilled.
This is the rose that I planted several years ago, when I began this project. It is Madame Alfred Carriere. In the warm wind it has a faint spicy scent. 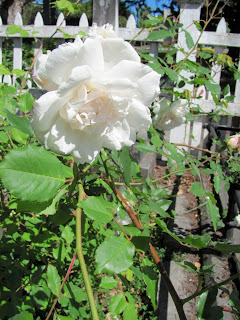 And these are the cracks which opened up at 5 minutes to 11 on the morning of the 3rd of February 1931.
The cross cracked and toppled.
Now it has been completely restored.  What further symbolism does one need, I wonder...
I am sure something will happen, develop during the events next week...
Something or someone will come out of the woodwork for sure...
In the mean time contemplate this lovely shade of white... 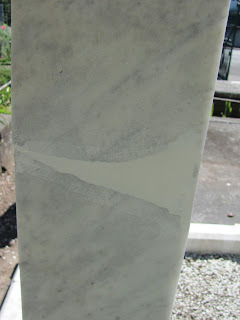