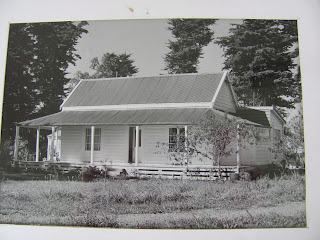 In one way a book never ends...My book was probably being printed in China when an acquaintance kindly got in touch and gave me an astonishing piece of information. There was a building at Hohepa Farms which might be linked to Colenso’s original mission station. For those of you who have already read my book you will know how the entire book is framed round the mysterious absence of any ruins of this mission station at Waitangi.
The thought of something surviving both excited and depressed me. Excited me, because it has something about it of the magic carpet. (Could something have survived, essentially from the 1850s intact?) Depressing, because the news had arrived too late to be caught in the net of my book. But then is a book ever really finished?
Regardless I wanted to see the place, to test the hypothesis that the building at Hohepa was linked to the most potent time in Colenso’s life.
I went out there as soon as possible. Gail Pope came along with Eloise Taylor from the HBMAG (I like to think that Colensoitis is catching...and it is...)
First we went into an office. A bird was captured behind glass, struggling to get out. A helpful man showed us a black and white photo, which I have reproduced above. The b &w photo came from the 1950s or 1960s, from a time when colour photography was an expensive luxury.
To me it appears like a building from the colonial period - but perhaps later than the 1850s. To me it looks more like the 1860s and even 1870s. (Could it be, however, the ‘unlined store’ into which William, Elizabeth and Wiremu and their household dragged themselves, weary and stinking of smoke, the night of the terrible fire in the Mission? This was January 8th 1853? The possibility flared behind my pupils as I looked into the photo.) 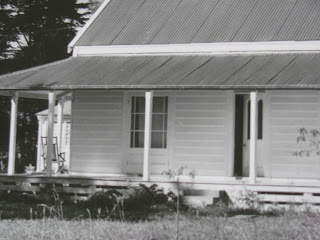 I noted the french doors ('French casements' as Colenso called them in the main mission house. These were the doors he opened so the floods could rush through the house unimpeded.) The french doors in this building did look old. There was also a charming-looking series of windows to the side....what were they? 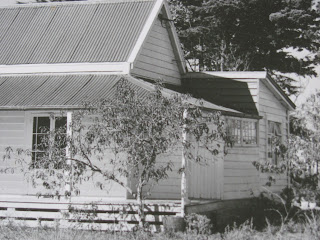 When we came out of the office, I was pleased to see the bird had escaped...
We went to look at the building. I always gazed at the trees at Hohepa as I drove past. I wondered how old they were - when they were planted - whether they had some connection with Colenso.
As I say in the book, I always hoped that the Mission was on the Hohepa side of the river, rather than the Te Awatoto, where the huge fertiliser works was...
Now we walked through the small village of buildings towards the possible house. (It now houses men and women who are intellectually handicapped and who live on site. The place has a calm atmosphere, though that day I noted a police car parked on site. It had driven past us, lights flashing, earlier...Looks can be deceptive.)
The cottage was inevitably disappointing. This happens when you come across the past lodged in the present, like a splinter of wood buried deep in wax. Unsympathetic additions had been made in the 1970s-1990s, so one saw an old building, as it were, buried in the changes, a bit like a person who has had advanced and not very good cosmetic surgery: one looks  in dismay to see what ‘is original’. 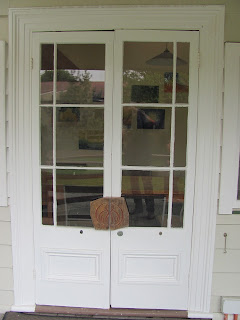 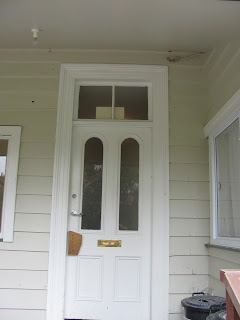 Clearly the french doors had survived. And the front door. But what about the pitch of the roof? Was it like the 1850s? Inside we walked from room to room, eagerly looking for signs. (I noticed a manhole was open. Inside it showed tongue and groove, broad planked.) 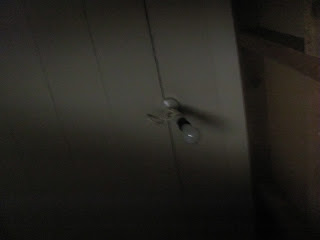 Someone who lived at the farm post war had a memory of the building being floated across the river to the site. Word of mouth was that it had been ‘Bishop Colenso’s’. But just like the inflation of a defrocked deacon to a bishop, there is a lot of imprecision in oral history. Or there could be. (Just as a specialist in local history, on the tramp out to the Ruahines, proposed the theory - which he believed to be fact - that the mission station site was actually further up the river than any site I had talked about. Alas, this conflicts directly with what Colenso himself wrote. He often talked of how there was only a shingle bank between the mission station and the raging open sea. On days of violent storm - of which there would have been many - he feared the sea would sweep over the bank. McLean also said the same thing in his diaries - the mission station was right by the sea.)
Oral history is a bit like toffee, it can stretch in either direction. Oral history has a different urgency in traditionally orally based cultures, such as Maori. But in the Pakeha world, oral history is like a counterfeit currency, lowering in value as it passes from hand to hand.
I want to go back with Douglas Lloyd Jenkins who is more knowledgeable about construction methods and have another look around. I am also going to have a cup of tea with someone who remembers the site from an earlier time. It's always interesting what chards of truth catch on the fabric of oral history.
I like this sort of thing: the detective story.  Watch this space. (Which space?)
Posted by Peter Wells at 12:40 PM