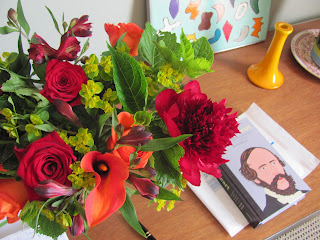 I am writing this in a blur of exhaustion and pleasure. The Colenso conference ended - well, I was going to say yesterday (Friday 11th) but there are still two events today: the tramp into the Ruahines and the all-bells-and-whistles church service at the Napier Cathedral tonight wherein Colenso is the central topic. ( I feel he will be listening intently - perhaps most intently of all...)
I am also on National Radio this morning, being interviewed by Chris Laidlaw at 10.06am.
http://www.radionz.co.nz/national/programmes/sunday
The events of the past few days - the book launch on Thursday night, the revealing of the new Colenso portrait by Gavin Hurley, the two day talkathon on Colenso - have all been so momentous that I didn’t really sleep for the intervening nights...too much coffee, talk, wine, talk, thought, talk, excitment....and one of the fascinating things was meeting more of the Colenso family who came from as far away as...Australia, Canada and Britain.
On the final day of the conference, there was the most powerful sea.
The conference took place in the war memorial building which is perched like a gull on a shingle bank, right by the seashore. The waves were volcanic, the most splendid vision of white-grey spuming force. The whole town became covered in salt spray and for a beautiful day the city turned into a kind of black and white film, highly atmospheric. One seemed to be cutting through muslin veils as one walked.
Perhaps this was a metaphor for what we were all doing: moving back through time, moving forward through time, cutting a way through...hopefully revealing something new, or at least working towards a better definition.
One thing I loved about the conference was the ready talk of people being Colensophiles, people catching ‘Colenso-itis’, or being bitten by the ‘Colenso bug’. This happened to me a few years back so virulently it led me to write...a book....which somewhat astonishingly is now a physical object...real...while my mind is an echo chamber of further thoughts, other people's ideas and perceptions of Colenso...

Once I calm down and get a chance to collect my thoughts I'll put in some more info here about the conference, which is such a boring word to convey what is really a 'thought jamboree'...
Posted by Peter Wells at 12:09 PM