I have been shortsighted for a long time and got glasses, much to my mortification when I was 21. I refused to wear them for a long time until I found a pair of 30’s style specs, a variety of which I wear today. 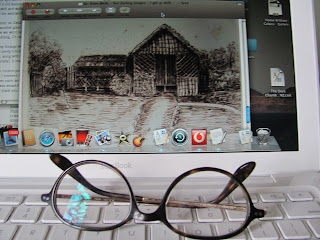 But the fact was I had got used to soft focus, which is no bad thing given the general rawness of the world. Nevertheless it has its down-sides. The house, seen through my spectacles, suddenly assumes a mantle of months-long dust (I love dust’s old fashioned name - sluts wool.)
Similarly, a glance into the mirror with and without specs has the effect of a pleasing lack of detail or a sudden collapse into the averlanche of age.
When I was out for dinner on Saturday night I walked into the kitchen for something - probably another glass of wine - when the hostess suddenly whipped the pie I knew we were having out of view. Because I didn’t have my glasses on, I saw nothing. Or rather, only a smudge.
Imagine, dear reader, my feelings when I came in to sit down for dinner and there was the most lovely tribute.  The words Colenso had been formed on the pie crust, along with the smaller details of open books (printing) and leaves (botany). It really was immensely touching. 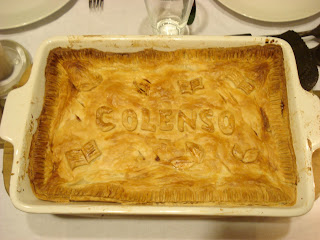 The pie was delicious, a chicken pie from Annabel Langbien’s ‘Great Food for Busy People.’ Since I believed Annabel Langbien was Nigella Lawson’s evil blonde twin sister and had been invented by some sort of chemical experiment, I was amazed when the pie turned out to be completely delicious. So thank you Lucy and Michael for making such a tasty tribute, one, moreover which could be eaten.
Posted by Peter Wells at 8:25 PM