Yesterday a friend was in Napier so I took him round some Colenso sites. This includes Waitangi, 9.2 kilometres out of Napier where William Colenso and his wife Elizabeth had their mission station. We then went out to Meeanee , a sort of flatlands about 2 kilometres away. Normally I go out there to buy my vegetables at 'Vegelands', a cheerful place where a NZ-Chinese family sell excellent vegetables and fruit at prices way below the supermarket.
(In fact recently during a snow storm, the supermarket ran out of fresh vegetables, revealing what we all know: Hawke's Bay vegetables are trucked out of the area to a central pricing point then trucked
back into Hawke's Bay with a new higher price added along with the suspect word written in plastic 'FRESH'.)

We went and looked at a curious place, the church where Sister Aubert worshipped. It is now a restaurant
of a glam sort. You urinate where the high altar once was. I cannot do this without a kind of silent prayer.
It seems profane. In fact to be eating in a one-time church seems pretty suspect too.

My friend saw French flags and said it was a nice acknowledgement of Aubert's French peasant origins.
Somewhat wearily I said: no, it's the World Rugby Cup. The French team is staying in Napier this weekend.
Everyone is very excited.

From here we went up Colenso Avenue, where I showed my young friend the small cottage to which Colenso
withdrew in the late 1850s, early 1860s. Then along to the beautiful Ormand Chapel which was once
the grammar school (so maybe there is a long history of religious buildings having multiple uses.)

Into the graveyard to look at Colenso's celtic cross, which I noted some kids had scribbled on with crayon.

It was a beautiful, almost glittering day of early spring. The wind was sharp but the sun clear and, if you could get out of the wind, warm. Native birds called out and I showed my young friend - perhaps perplexed to be among a city of the dead - the places where so many young bachelors lay. He asked me if I thought they were gay. I explained that colonial life was often brief and violent. Many of these men came out without families and
much other support. They worked hard and died young. Of course there are secrets, but these, for the most part,
have remained secrets. There is a melancholy attached to these young lives lost to time and the world.

But there is also something, well, earthing to be in a place where so many dreams and hopes have ended. To me it isn't melancholy so much as elucidating. Perhaps that is the romantic - the optimist? the delusionist? in me.

Come November I will be taking a tour of these same Colenso sites during the celebrations to mark
Colenso's birth.

In some way it is like telling the rosary beads (although I am not Catholic or even really particularly religious.)

Below here is a spruiking document for the forthcoming celebrations....

But like telling the beads, going round these sites gives a curious comfort, as if touching some intangible mystery. 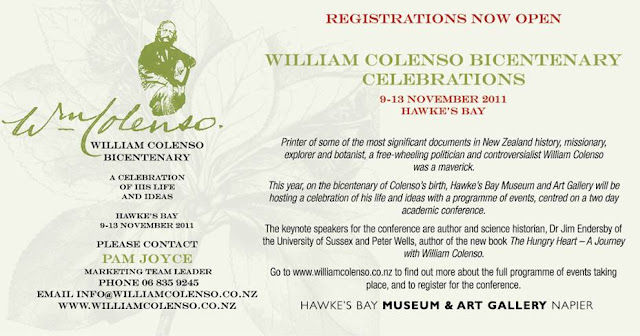