I went over to Australia last week and on the flight over I thought of the phantom book which was the shape of the book I delivered to the publisher pre-edit.
There is necessarily a lot of material not placed in the end-book.
I thought of two things: one is how I might at some future point release the entire book as written at a full 236,000 words. (Currently it is sitting at 150,000 words approx.) I might do this online when the life of the book as object has had its run - usually a couple of years.
The other thing is: I might just release the odd chapter which never made it into the book. One chapter was my favourite - the photographic images of the Colenso family and how we read them.
It was an expansive essay I particularly enjoyed writing. Somehow it got lost in the chronological rush of the end-book.
(Below is a fascinating photo of Elizabeth Colenso seated, Fanny her daughter staring straight at the camera and the elegant Hariata Pomare carrying her child, Albert Victor. It is 1862 and they are off to Windsor Castle, to visit Queen Victoria.)
Hariata's splendidly handsome husband had written a letter consoling the Queen on her recent widowhood. It caught the Queen's attention and she was so taken with the couple that she became godmother to the child. She gave the baby Albert costly silver christening ornaments which now lie somewhere in the Auckland Museum - unviewed.  Elizabeth went along with the couple as chaperone and translator. She looks very stern here in the photo and I muse in my essay that she felt very uncomfortable being photographed because she associated it with prying eyes looking at her scandalous
past.
I could never locate the original of this photo which is allegedly in one of Wellington's national museums. I took this snap from a book.
I like to think Elizabeth Colenso spent a long time choosing her bonnet. 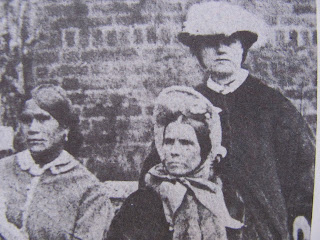 I still have one final set of proofs to go through this weekend....I can't wait to get outside the sticky thicket of words....
Posted by Peter Wells at 4:08 PM