Today the public announcement of my project appeared in the press. Complex realities, as always, get shortened into a haiku which closely approaches nonsense. Here is an article in the Dominion-Post, the headline of which caused me to wince and close the paper quickly before I reopened it to read the article. 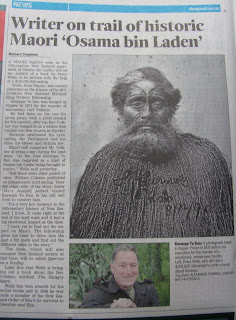 The article isn't so bad and gives some overall sense of what I am hoping to achieve.

Nevertheless I felt disquiet so decided to send the below letter to the Dominion Post. (I realise it makes me seem like a pantywaisted paid up member of the PC brigade...but I wanted to correct what I felt was an impression which could injure the project.)


Dear Sir,
I winced this morning when I saw the inflammatory headline over the article referring to Kereopa Te Rau and my projected book 'Sparrow on a Rooftop'. I have just had the good fortune to be awarded the Michael King Fellowship and I felt there was a degree of cultural insensitivity in the headline, accompanied as it was a photo of Kereopa Te Rau, which would have given Michael King pause for reflection. My book hopefully will address some of the sensational feelings of the time when Kereopa Te Rau was caught and hanged but to reproduce a headline like ‘Writer on trail of historic Maori ‘Osama Bin Laden’  is to make it seem as if I echo the ugly sentiments of those Americans who were shown celebrating Bin Laden’s execution. It is not an emotion I share. I would like to make it clear that I wish to dissassociate myself from the headline - as I am sure any reader who perservered and read the article in its entirety would understand.
Peter Wells
I had just pressed send when there was a knock on the front door.
A bouquet was being delivered... 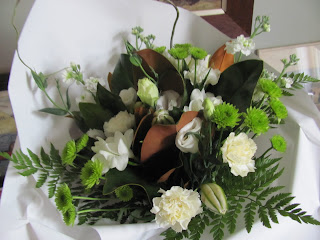 So there you have it....my life at the moment....brickbats...bottles of wine...and bouquets...
I always remember Maurice Gee, the wonderfully sage NZ writer saying the worst thing a writer can have is nothing happening in his or her own life....or too much...
Now...I should get back to my footnotes for The Hungry Heart...but somehow I feel I need to go for a walk...I feel a bit dazed....
Posted by Peter Wells at 6:51 PM 13 comments:

I had a vintage Tuesday recently. It began in the morning with a totally unexpected gift of a bottle of wine from a kind person who had read that I had finished my Colenso book. This put me into an almost permanent good mood (and in fact I have the wine bottle on my desk. I just enjoyed looking at it.)

Then in the evening of this vintage Tuesday - in which all the forces of chance came together - I heard I had been given the Michael King Fellowship.

This evening I will drink the wine.

(Below is the press release...)

26 May 2011
Media release
Peter Wells announced as recipient of 2011 Creative New Zealand Michael King Writers’ Fellowship
Author Peter Wells has been awarded the $100,000 Creative New Zealand Michael King Writers’ Fellowship to research and write a non-fiction book titled 'Sparrow on a Rooftop'.  The book looks at the months of December 1871 and January 1872 when Kereopa Te Rau was brought to Napier, put on trial for the murder of the Reverend Volkner and hanged.
The Creative New Zealand Michael King Writers’ Fellowship is one of New Zealand’s largest writing fellowships and supports established writers to work on a major project over two or more years.
Suspected of spying by Te Whakatohea, the missionary Carl Volkner was hanged from a willow tree outside his own church in Opotiki during the height of the land wars in New Zealand.  Kereopa Te Rau swallowed Volkner's eyes and became infamous. On the run for seven years, he was eventually captured, tried and hanged in Napier.
'At the time Kereopa Te Rau was regarded as a kind of Osama Bin Laden being brought to justice,' Wells says. ' But there were other points of view. William Colenso published an impassioned tract saying 'Hear the other side' of the story. Sister Aubert visited Kereopa Te Rau in his cell and tried to comfort him.  'Sparrow on a Rooftop' is as much a portrait of a time as an event.  You have to remember it was Christmas and New Year and in the small colonial town of Napier there were theatrical events, adulteries, lost property, fights.  Meanwhile inside a room, a man waits for his death…'
'This story allows me to sink into the rich compost of local history, which is where the small truths - and deceptions - lie, ' Peter Wells says. 'The 19th century was the furnace in which contemporary New Zealand was forged. It's a great privilege to get this support so I can take my own time to go back to a crucial moment.'
A writer of fiction and nonfiction, and a writer/director in film, Peter Wells’s first book, Dangerous Desires, won the Reed Fiction Award, the NZ Book Award, and PEN Best New Book in Prose in 1992. His memoir won the 2002 Montana NZ Book Award for Biography, and he has won many awards for his work as a film director. He is co-founder of the Auckland Writers and Readers Festival. In 2006, Wells was made a Member of the New Zealand Order of Merit for services to literature and film.
This year he is bringing out The Hungry Heart,  a contemporary look at the 19th century dissident and polymath, William Colenso.
Creative New Zealand Chief Executive, Stephen Wainwright said that the applications for this fellowship were high and of exceptional calibre.
“I look forward to reading this tale that with Peter’s interesting and innovative way of narrative will not only highlight the personal story of Kereopa Te Rau but also regional New Zealand – colonial Napier - in the nineteenth-century.”
Wells will be the ninth recipient of the Michael King fellowship since its inauguration in 2003. It was renamed in recognition of the late Michael King for his contribution to literature and his role in advocating for a major fellowship for New Zealand writers.
The selection panel for the award, administered by Creative New Zealand, was Geoff Walker, Fiona Farrell and David Hill.
Previous recipients of the Creative New Zealand Michael King Writers’ Fellowship are Owen Marshall, Vincent O’Sullivan, CK Stead, Rachel Barrowman, Neville Peat, Dame Fiona Kidman, Philip Simpson and Kate De Goldi.
Ends
Peter – This is an adaptation of the Book Council bio on you, please amend as you see fit...
Posted by Peter Wells at 7:03 PM 4 comments:

I decided to put this image on here just because I love it. 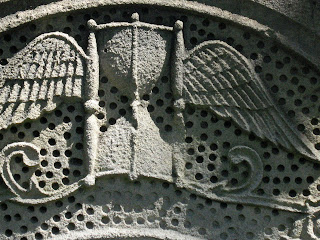 It comes from a headstone in the Napier Hill cemetery. It is a beautiful hand done piece of work. Whoever did this piece of work also did other highly individual headstones in the cemetery.

After a while you feel you have seen every angel and marble cross but an image like this, which is all about sand sliding through the glass, has elements of individual vision.

At the moment I feel conscious of time, as my editor looks at the book I have written and I await the verdict...

Meanwhile I am checking quotes and taking the odd walk which feels slightly wonderful...

A good friend of mine, a fellow writer, always says finishing a book is like getting over a sickness. You feel a bit weak and have to take things easy...

Bad Boy Will....Colenso on how Trees Can Save us and Keep us Sane...

Recently the Napier Mail, one of our local newspapers, reprinted a talk I gave to a Treecrops Association conference by Colenso's grave. It was on Colenso's attitudes towards trees. (I have put my talk down below....)
I was bemused, amused and fascinated by the editorialising headline. The fact it says GOOD SIDE heavily implies there is a 'bad side' to William Colenso I am not talking about, or covering up. 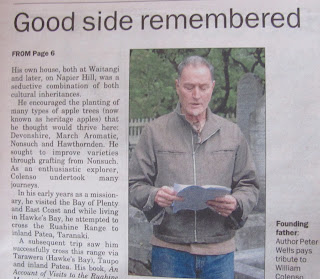 I finished writing my book....

I know this is only the end of one long journey and another will begin soon enough (editing etc etc etc).

But...it's hard not to feel both exhausted and jubilant.

My study is a mess, but a pleasing sort of nest at the same time.

I kind of worked round and through my cold...

Here are some pix of things in my room which kind of walked me through the last stages of the book... 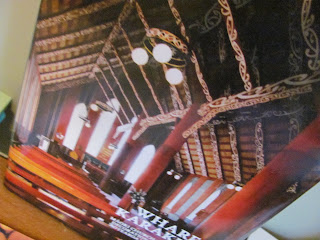 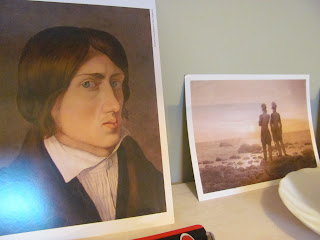 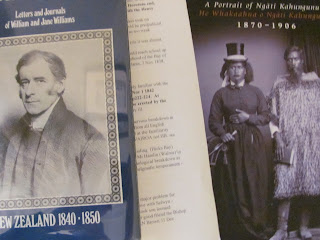 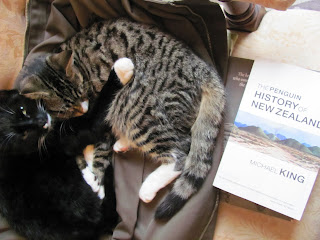 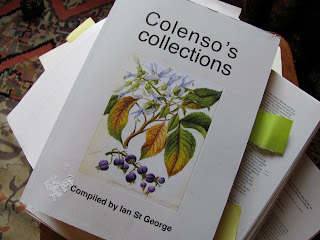