Serendipity (n): The faculty of making happy and unexpected discoveries by accident. 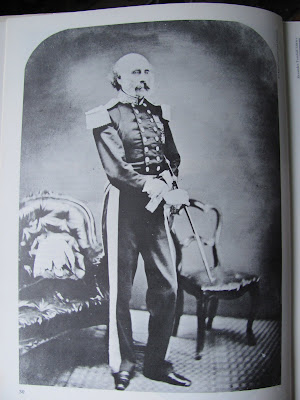 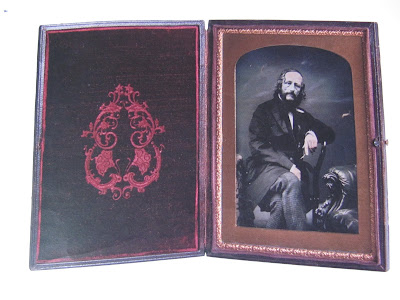 I had been working all day on a piece of writing to do with the above photograph of William Colenso. It belongs to the Hawkes Bay Museum and Art Gallery and is a particularly beautiful ambrotype - an early form of photography which superceded the very first form of photography, the daguerrotype. It was taken by JN Crombie, a Scots man who made a very good living out of photography in colonial New Zealand. He had a hawker’s instinct for good publicity: a colonial photographer was many things, an artist who was also partly a circus performer, putting up his own tent, beating his own drum, taking the cash at the door and sending the punters away satisfied. He did vice-regal portraits - ie nobs - and catastrophes, like the sudden collapse of a building. He did panaromas and sold them to the Illustrated London News - a coup. (A contemporary parallel would be getting some footage on BBC or CNN - and being paid for it.)

This ambrotype was done in 1865 when William Colenso was a member of Parliament. Parliament sat in Auckland in those days and Colenso had gone into Crombie’s studio in Queen Street, situated above ‘The Stafforshire Pottery Depot.’ There he posed, the light flooding in from the windows in the roof.

It is an elegant image, finely composed with many different textures - plaid pants, glittering chair, silk frockcoat, the gleam of wood. But undoubtedly the eye always travels to the face and here one sees the face of a beautifully dressed man who has obviously been through some personal tragedy. His face looks haunted.

Nevertheless what interested me, as a film maker, was the composition of the photograph - the interesting way the arm of the leather chair intrudes into the photograph from the side, creating a kind of stepped back perspective which is echoed by the fact Colenso isn’t sitting four square on the chair. He is posed, dandyishly, sitting across the chair, with a rather lanquid arm resting on the balloon back’s top rail.

Altogether it is a fascinatingly complex ‘jumble’ of angles which yet holds together beautifully. It seems to say something about Colenso himself.

I had worked most of the day writing about this image and felt curiously exhausted by the end of my working day - about 2 o'clock. When I went to get my hair cut I couldn’t stop yawning. Then this evening I was going through a box of books my partner had selected to go off to a book auction. I came upon a book we have several duplicates of - an excellent book: William Main’s Auckland through a Victorian Lens.

I took it out, wondering if he wrote anything about Crombie. To my delight there was several pages of information, some of which I have used in my first para above. But I felt a flood of true pleasure when I turned the page and there, in an image of Governor Gore Browne was the very sofa and chair which had been used in Colenso’s photograph. I felt an almost idiotic delight. I rushed in to tell my partner. But as I told him, somehow the pleasure faltered. What was the big deal?

How could I explain the fact I felt I had made a remarkable connection. There was I seeing these photographic props in the round, so to speak. I had not known whether the obtruding leather chair in Colenso’s photo was a sofa or an armchair. Now I knew: it was one of those two winged Victorian sofas. And it was covered with what looked like, in this black and white world, a glittering manteau of horse hair. My joy doubled when I spotted the same balloon back in the back of Gore Browne’s photo.

I felt almost as if I had a personal relationship with these pieces of furniture. Realistically of course all I had seen was the same props used completely differently. A photographer probably grew exhausted trying to think of new ways of using the same old tools of enchantment. In the Gore Browne photograph they are used mundanely - almost as an after thought. Browne’s classic feathery hat of a colonial governor sits like a cat asleep at the very back of the chair: had he refused to place it on his head? Indeed the whole physical arrangement of the Governor looks awkward. His stick has a clumsy relationship to the chair and he himself lacks physical grace.

Or could one say the photographer failed to hide his lack of physical charisma. Compared with the Colenso photo, his face says nothing at all. Admittedly his eyes move past the lens but it is very hard to get a feeling for his personality. He recedes into his body, his period dressing, his epauletters, his ‘hair’ wear. He doesn’t seem anything more than them. He seems as alive - or dead - as the sofa.

Compare this to the Colenso photograph and you get a much keener sense of an individual.

Of course my discovery meant very little - almost nothing.

But the fact is I will go to bed tonight feeling good about being alive. I feel, for some strange reason, as if I pierced through to another dimension. As if I had actually climbed the stairs into Crombie’s studio and for one moment - the briefest moment- glanced into an empty room. And seen, sitting there, outlined in light streaming in from a window above....a horse-hair sofa.... and an empty chair.