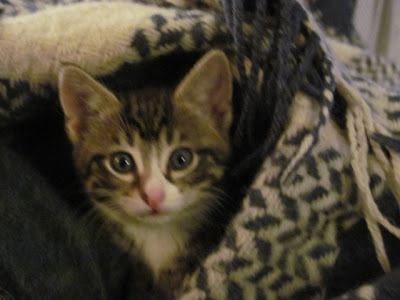 Many Christmases ago I adopted an abandoned cat. She was starving and distressed. This was Madameska who died a brief time ago.

Alas, this coming Christmas, a litter of kittens was born in Douglas’s mother - Barbara’s - shed.

I resisted utterly the siren call of another cat.

But inevitably fell victim to the old allure.

Abandonment at a season of ‘goodwill’/gluttony. An intelligent enquiring face. Obliteration by death.

She passed the audition with flying colours and is at present called Zelda.

As Douglas says she is moving into what can only be described as a very spoilt existence.

It was her lucky day.