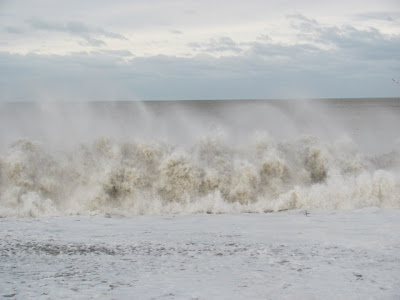 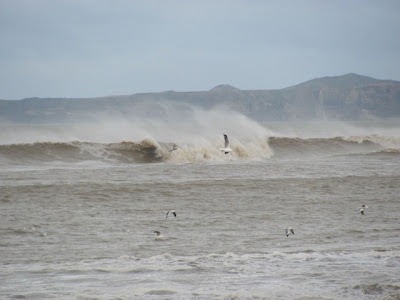 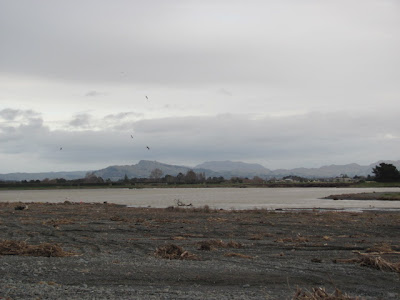 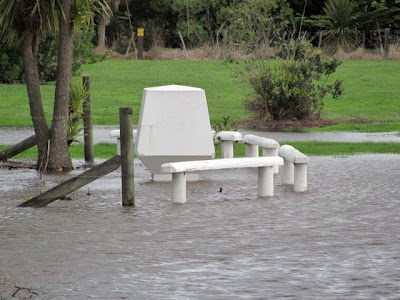 I was driving by on my way elsewhere when I saw the huge waves riding high above the dunes. The spray flung itself into the air. I decided to come back, with my camera to take some photos at the Waitangi Mission site, where William Colenso had his mission station.

I wanted to record the misery of the place in the depths of winter. It had been raining hard, there were floods up in Gisborne and the Wairoa road was closed by slips.

The sea was running high.

The wind was crystal cold in my face and as soon as I got out of the car, my skin stung.

As you can see, it is a hell of a place.

And even the memorial site was under water.

I find myself continually attracted to this site and I sometimes wonder if the Mission Station was still there, accompanied by a tourist shop, maybe assistants in dimity mock-missionary attire - selling Colenso fabric dolls - if the lawns were perfectly mown and the heritage-coloured paint was dry - if the huge people-moving buses were momentarily parked, the driver’s face slack with boredom: would I be remotely interested in the place as a site?

I would visit it, hopefully reverently, but secretly full of disbelief.

The fact is I prefer the emptiness of this site - it has a kind of bereft poetry which goes with Colenso’s soul. It was a place he wanted to live in all his life.

‘time was, when I could scarcely have borne the loss of it’

Probably it was a wise decision because before too long floods would wash away everything, eradicating the faintest signs that there was once a mission station here.

I look at the waves and think of William, aged 33, his wife Elizabeth aged 23, their one daughter Frances/Fanny arriving here.

They came on a day like this, even worse. They crawled up the bank to the raupo hut which had been erected for them, by the welcoming Maori. (120 canoes came out to welcome them.)

I suppose it seemed the beginning of something momentous, which in some ways it was. An entirely different way.

But now it is the place of migratory birds, fishermen, or on this horrible day, a lone man getting his tiny dog to defecate and a strange person, myself, trying to gather images which evoke an enigma. 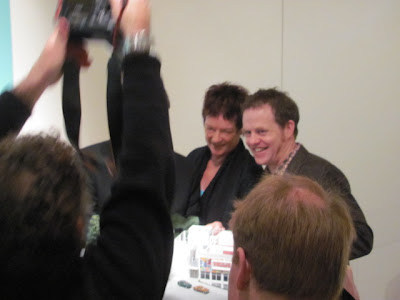 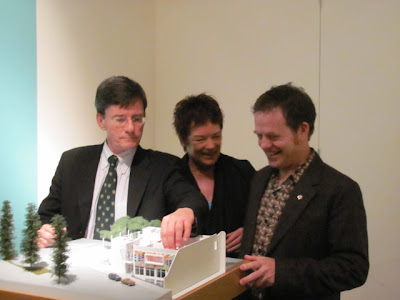 It was last Friday we heard that the government was going to kick in $6 mill so that a new extension to the Hawke's Bay Museum and Gallery can be built.
It was a beautiful day.
The feeling in the room was fantastic and warm.
As it is with good news.
These snaps are of Douglas with his close pal, Mayor Barbara Arnott.
The other snap is of Chris Finlayson, minister of arts.
I like these snaps as the camera seems to catch the fleetingness of joy.
It was a good day.
A long time in coming.
Posted by Peter Wells at 9:53 PM 9 comments: