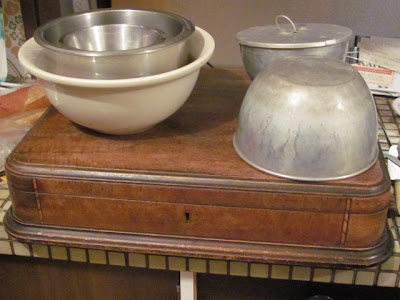 Farewell to the baking bowl which I licked out as a child, waiting patiently for my mother to hand it over.

By this time the sweet superation of butter and sugar would start to work its magic, inside the oven.

If you flipped the bowl over, there was a tiki underneath. It was early Crown Lynn, before it meant anything other than a kind of local poverty.

Farewell to the canteen of cutlery from which we took the knives and forks, desert spoons and serving spoons obediantly every night.

Goodbye to the oyster-grey velvet in which the Walker and Hall silver nestled.

Farewell to spoons which sat on top of each other.

Farewell to all the knives and forks which endured over seventy years of my parent’s marriage, nothing lost, nothing damaged.

Until, towards the end, my mother could no longer work out how to remove a small knife from the canteen. She twisted it out and the blade buckled.

It seemed the most poignant symbol of her fall from grace.

Goodbye, old canteen of cultery, with your careful pattern of matched ply on the surface spliced open into four parts, like some internal organ of a beautiful beast.

Goodbye to the alumium mixing bowls which once seemed a statement of modernity - of the way the world would keep on improving.

Goodbye to all the things from my childhood: you will spill out into the world now, flotsam and jetsom, to be gathered in from some junkshop, if lucky. If unlucky, to end up, ignored on a blanket in some flea market. Or worse still, to end up unused, chilled by the lack of warmth of touch by a human hand.

Farewell to all the tools of family life, you outlived your use.

But for me you still possess some ineffable grace.