Across a narrow bridge, to safety.... 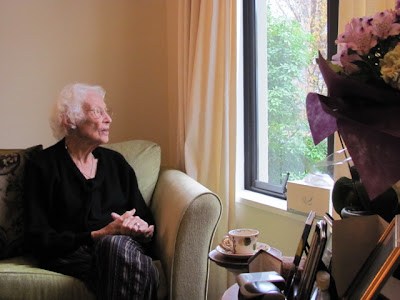 Today is a special day in my life. Bess, my mother, hits the bridge table. This is the first time since she came down to live near me in Hawke’s Bay. She was always a top bridge player and I think it is how she has kept such a sharp and accurate memory.

She now lives two minutes from me, in a retirement village. She is in much better spirits. She has a small studio room and is regaining her self possession. I feel a subdued but very real happiness. It is almost like a state of grace.

But something worries me. When she initially became very ill and distressed, I had to find a place for her in a hurry. This was in Auckland, where she lived. I couldn’t cope on my own, it was too much. I found ‘respite care’ for her.

Having looked around at several options, the place I chose seemed much the best. It was near where she lived, her friends could visit and it seemed peopled with ‘people like her.’ (In fact an old bridge friend lived in the room next door.) Bess was not in good form and I thought I had lost her forever. Her mind seemed to have gone, though her body was still present. At this time I emptied out her house and began the painful business of trying to sort out her life.

But while at this Auckland place, something very bad happened.

Most of the elderly people lived on the first floor. There was a lift which took them down to the dining room. But within the first two weeks, the lift stopped working. It was out of action for more than a week. Very elderly people, many of them on drugs, had to negotiate a broad stairwell of more than seventeen steps. There was not enough staff to help people up and down the stairs.

I came in one day and Bess had just fallen backwards down five steps. Nothing was broken but from that date she would never walk unaided again. She would be on a walker. She was badly bruised and her skin cut. She was dazed and confused.

I was confused and angry. I said,’ It’s that fucking lift being out of action. This was inevitable.’

I felt I had let my mother down, despite everything I had tried to do.

I had failed her.

But what I didn’t do was report the retirement village. This was despite the fact other elderly people continued to fall down the stairs.

Guilt. I see that now. I was so grateful for the village taking my mother when I could no longer cope on my own. I would remain silent as the price.

I can see this happening all over New Zealand. Family members remaining silent because they feel guilt that they can’t look after their mothers or fathers.

But in the end it is these mothers and fathers who suffer the consequences.

I realised this when I read an article in the paper about a daughter who took her mother out of a Bupa retirement home when her mother was almost dying of septaesemia and nobody had noticed. She said the staff was largely migrant labour, poorly paid and not professional. In the end her mother almost died. The daughter had to pay for a nurse to come in and feed and bathe her mother, even in a public hospital, as staffing levels were so poor.

But what worries me is that feeling of guilt. And the silence it buys.

My mother now feels she’s been delivered into safety, into a zone where she can be herself. I love having her nearby. I realise at the age of 94 I won’t have her with me forever. I can keep a close eye on her. And I won't keep silent any more.

And today marks a special day for me: Bess hits the bridge table again.....it feels great.