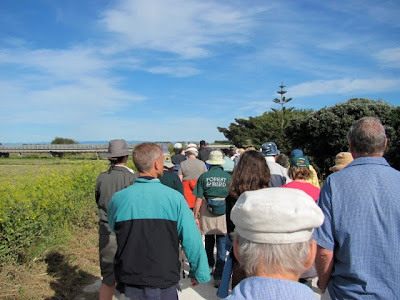 In the days of early colonisation, Pakeha-Maori were people who were basically low-status people within a tribal situation who happened to be of European origin. Often they were tattoed and assimilated into a Maori world. Occasionally this assimilation was so indepth they couldn’t make the transition back into the European world from whence they came.

I mused on this yesterday when I was on a Department of Conservation walk into the wetlands round Waitangi River, in Hawke’s Bay. This is right beside the Colenso Memorial site, where Colenso had his Mission Station 1844-1853. The ‘walkabout’ was a ‘family-friendly’ trip to the wetlands where we would be guided by the HB Regional Council and DoC staff, ‘and learn about Whitebait, birds and the importance of estuaries’. Note the absence of history from this summation.

I went along hoping to get a better sense of what the area had been like when Colenso lived there. Though I’d already done my own research, when Colenso described the area as a ‘delta’, with what he also described as a ‘jungle’ of cutty grass so immense you got lost in it. It was the highest he had ever seen on his travels (which were extremely extensive in the North Island). He said it meant, in the heat of summer, the slimey mud underfoot stayed cold. He himself was lost in the ‘jungle’ more than once. As he described it, you could not see him from the highest ladder, or chimney.

In my mind’s eye I saw his wife at the Mission Station mounting a ladder trying to see if she could see her husband who had gone worryingly missing. Everything was flat around there - for miles.

As it was, the party of people was quite large - about sixty altogether, made up of the elderly who wish to stay informed, young couples with children, the occasionally younger person and a single Asian young woman, possibly a student. She had a tiny koala bear attached to her backpack.

I was fascinated when we got to where the Mission Station had been: Kathryn Barr, an archeologist gave us a breif summation of information. (Already she had said to me ‘ he only lived there a brief amount of time’.) I felt shocked as the time there was so action-packed emotionally for William Colenso: it was the alpha and omega of his hopes and dreams. It’s such a vivid story. Then I realised she was thinking archeologically, in which millenia is probably a blink, or maybe a wink.

Her summation was adequate but of course to a fanatic like myself it missed out the guts: the illegitimate child, the fall from grace, the inter-hapu rivalries. She described his house as a ‘cottage’ whereas WC is always very assertive about its grand size and unique bicultural style.

The thing which stunned me was when she asked if anyone had any questions. There was a moment’s muffled pause - that pause familiar to any teacher who asks a question. Is this silence peculiar to New Zealanders, I wonder? That brew of modesty, low self esteem and even a quiet kind of hatred for those who ‘speak up’. But then the silence broke. I braced myself to hear what the crowd thought of Colenso. But the woman, early middle-aged, Pakeha, sun-glasses, wearing blue asked the quinessential contemporary question: ‘Do you know of any areas of black mud which Maori traditionally used for dyeing purposes.’ Kathryn opologised and said she did not.

But what interested me was that swift ellipsis of New Zealand - it is as if Pakeha history meant nothing, had no weight, no substance, almost no narrative. It seemed not to catch on anything meaningful, so that it slithered away into silence, inconsequence: meaninglessness. Meaning came from something Maori. This was how Pakeha people now tried to position themselves. They tried to adopt all things Maori. They also, coincidentally, rejected any ownership of their own past.

I was aware of various people in the group wearing Maori tattoes. There was  a middle-aged Maori woman with a moko on her chin. But these were Pakeha people. One had a tattoo on her back, one on his leg. Of course there’s nothing new in this - it’s become a fashion cliche. But like conventions, it says something: Pakeha wish to become Pakeha-Maori, they wish to ‘identify’. Probably in their innermost hearts they would like to wake up Maori one morning, the whole nightmare of colonial appropriation over. To put it another way, they want the skin of the Maori and if they cannot get the colour, they will get the design.

I spent the rest of the walk looking and listening. We crossed the busy road and we found a man-made lake I had never seen before. It was quite beautiful, almost like an early painting by those artists who flatten everything out. There was the vivid green of pond-scum (?), the blackened shapes of flax spears, a sheen of water - black swans - and in the distance, the kind of dsytopia you expect today - the Ravensdown fertiliser works, its chimney smoking on a Sunday.

The department of conservation people used the tongue of today - ‘providing wildlife values’ - and we learned about the brief and brilliant life of whitebait (the best breeding ground ironically was a drain nearest the fertiliser works): how birds like godwits, white fronted terns, common black gulls used the area, especially during winter: how the landscape had changed rapidly, as you would expect at a river mouth with a vast delta behind it, and mountain ranges feeding into the delta: how there was a weekly collection of rubbish because ‘huge volumes are dumped’ - it’s a ‘fact of life’; how they wished to obtain ‘a positive outcome’ by creating more wetlands, or rather turning the rough pasture back into a simulacrum of what it had been like.

I didn’t think anyone there had an idea of the ‘jungle’ that Colenso talked about - its fierce otherness, its hostility to human traffic. (Colenso said it was furrowed by the tracks of wild pigs.) It was a tapu area tribally.

As Steve Cave, the good natured DoC official said, this was ‘a good era - so much energy is being devoted to conservation.’

At one point I looked at the young Asian student standing beside me. She looked vague, distant. She was biting the ends of her hair. She alternated this with looking down at her sneakers with a great deal of interest.

I thought of how some things don’t catch, mean anything.

The occasion finished with an invitation to join in the ‘lights out’ symbolic moment on Saturday 27 March 2010 when, we were told, even the lights of Las Vegas would dim. An impressive coloured postcard had been printed, though I noted it could not be used as a postcard.

It invited the public to a family event at the Hastings Opera House. There would be kapa haka, bongo drums, fire poi, a Samoan choir, bagpipes, music from Mitch Wade, poetry from Keith Thorsen and - we were asked - ‘don’t forget your torch!’

Somehow this evoked village fetes and dramas of old - the strange mixture which I guess represents the state of contemporary NZ culture.

It also seemed to be about contemporary pieties - those horrible half-truths made up dreams and illusions. Like ‘peace in our time’.

As for those harsher messages, burnt into flesh, with fire and agony, of fierce intellect, of ugly truths and more radiant meanings - these are best left outside.