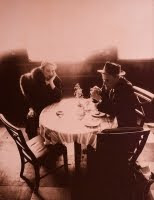 This photo was taken by Philip Peacocke in approximately 1974. It was taken in the tearooms of the Auckland railway station. It was the time of Bertolucci's remarkable evocations of the 1930s. It was a time of conscious decadence. I am wearing a magnificent set of fox furs - rouge.
My nails were probably painted black. I would be smoking Sobranie. My friend Sally who was the arbiter of the fashionable subculture had supplied me with some pills. They sort of zoned me out.
I sat down at the table, beside this elderly working man, eating alone. He did not look at me or speak.
Now I am so much older myself I look at this photo and feel a kind of grief. I recognise that
young man, his extremities, his urgencies, his beautiful madness. But I also empathise with the old man, who maintained his dignity throughout.
We would be passing through. He would die. In time, I myself would have to face the ogres of ageing. I would put aside the fox furs, the make-up, the elegant Sobranie.
The mirror would stare hard back at me.
But this moment, captured so beautifully by Philip Peacocke in 1974, captures a lost time....the kind of carelessness which is part and parcel of being young....
Posted by Peter Wells at 2:59 PM