The Smell of a Just Baked Cake 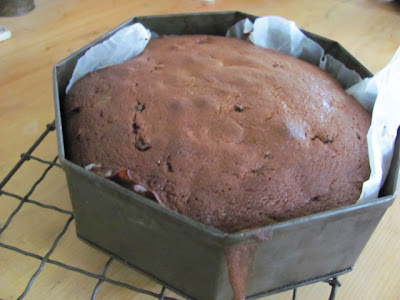 This is William Colenso’s birthday cake. He is 198 on Saturday.

The recipe is from his old nemesis Marianne Williams who never thought Colenso good enough, reliable enough - she saw something in him which didn’t quite fit.

Shame she was the boss’s wife.

The recipe is adapted from Alexa Johnston’s highly reliable book Ladies, A Plate. Though I have to admit, as I stood with flour all over the floor, flour on my teeshirt, a sink full of dirty sticky dishes - nothing is as sticky as Golden Syrup - I felt like a Chaplin clown let loose in the kitchen.

I started off by trying to cream the butter and sugar in the blender. This ground to a halt pretty soon. So - resignedly - feeling it was a step too far in terms of gender role - I put the butter and caster sugar in an old Crown Lynn bowl and went out and sat in the sun.

I used to have a wonderfully bitchy friend, a woman, who said NZ women’s forearms were brawny, based on the amount of creaming of butter and sugar they once did. (As well as beating air into egg-whites for pavlovas.) Now I understand why. It’s quite the gym workout.

Finally it took on the consistency of rather moist mashed potatoes, when you’ve put in a touch too much milk.

Another crisis was cutting up the ginger. How small? How large? The book for once let me down.....I sort of imagined raison sized.

Then the stickyness of golden syrup and molasses. I licked the spoon with the residue of molasses and shuttled down a hole back to childhood with its abrupt, tart,overwhelming taste.

It’s good for you.

But it was when the smell of the cake started permeating the house that I thought I’d done a good thing.

My grandmother, who was dangerously diabetic, used to bake a cake if she was feeling low.

I’ll take some of this cake away with me and on Saturday I’ll have a piece, to celebrate - just being alive in the twentyfirst century.