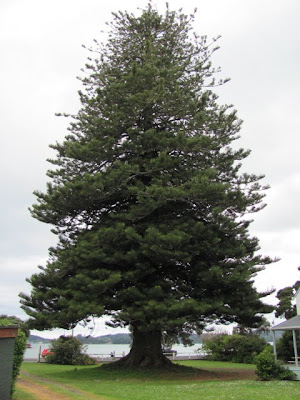 This is the tree that Elizabeth Colenso planted. It is on the foreshore at Paihia. Her descendant Gillian Bell told me to look out for the Norfolk Pine.

I felt filled with a sense of pleasure that there was something so tactile, so powerful left by a woman who is largely marked by absences from the narrative. It seems to express something about her - doughty, strong.

She was Elizabeth Fairburn when she planted the tree -  a missionary's daughter - born in New Zealand in the 1820s - so a very early NZ born Pakeha woman. Her first language was really Maori. And Paihia was pretty much her entire world until her marriage to William in 1843.

There is no acknowledgment to say Elizabeth planted this tree.

In a way it's like her own narrative - you read her in obverse, from what's not there, the absences. Almost like the reverse of a silhouette.

But it's fortunate in this case that the silhouette is so powerful.

As I suspect she was in life.