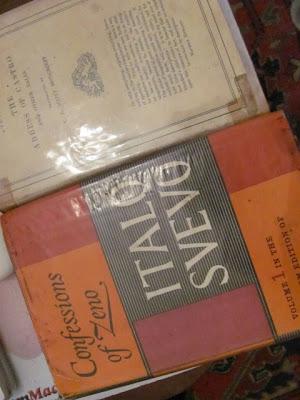 Recently someone said to me they no longer read books. They said it kind of wonderingly, as if it was a novelty still but also with an air of pride. This person was once a journalist on the Listener.

I thought about it afterwards. I wished I had said: well, it’s like walking. If you don’t do it, you fall out of the way of doing it. And soon enough you’re driving to the shops, you never walk anywhere and you lose the beauty of the act of walking - which is, in its own way, a form of meditation.

I said nothing at the time. I wasn’t sure how to reply.

Today in town here in Napier I noticed the second hand book shop’s sign - and it seemed a sign of the time. ‘SALE. All novels $5.’ Is nobody reading novels any more? But then, when I gave away about 2000 books to a charity I believe in, it was novels more than anything I parted with. I kept nonfiction, history especially. I also kept anything which seemed important in my intellectual development. Because the map of reading is the map of a self. But novels like Middlemarch I relied on the library having.

But yesterday in the Hastings Library, where I’d driven to, to pick up Helen Garner’s cracklingly good read, Joe Cinque’s Consolation and an audiobook of David Sedaris’s droll essays into nonfiction and memoir, I came across the cast-offs table. This is the table where the books the library is ejecting are placed. Books were 50 cents each.

I drifted towards it, full of complicated emotions. One part of me hoped to find an overlooked first edition. Most libraries seemed to go through a period of chucking out rare NZ fiction and poetry with gross abandon. But also I felt something more protective. I wanted to take home some books with me, as if I could offer some kind of longevity.

There was a beautiful rancid cover on Orson Welles’s first and as far as I know only novel, very forties and B-grade. There was a collection of Trollope’s Barchester Towers novels. My heart sort of shrank. How many other copies of these books did the Hastings Library hold? Or would it be like Edith Wharton - the Auckland Public Library jettisoned so many copies in the end they didn’t have some key works at all.

It’s a kind of loss of cultural capital. Or is it? These works aren’t dependant on being within book covers, you might say. You can read them on line. But seriously - reading anything more than 3 pages on line, for me, is a form of slow drip torture. It isn’t how the eyes and mind work - flicking back and forth, roaming the field of the page, pausing for a longer view. Looking into a screen is compulsive but also mind numbing. You are entrapped as much as free. I go back to the act of meditation. I believe reading a book is closely attached to meditating.

I came across these two books which I couldn’t resist buying. One is  Confessions of Zeno, a book which appeared in the NYer a while back and I couldn’t find a copy anywhere. The other is a book by Stendhal I haven’t read - and it’s translated by Scott Moncrieff who I got to love in the Proust’s translations (and whose florid Edwardian English had a very very very bad effect on my writing style when I was in my twenties.)

I felt virtuous buying them, but also somehow undercover. I was ‘saving them’. I was a version of Fahreinheit 451, a film I still remembered. (People memorised a book in a world in which books had been eradicated for ideological reasons.) I was also setting aside some delights for those inevitable - I don’t have anything to read moments - a wierd moment of panic for an inveterate reader.

But I would also love to know the decision making librarians go through before deciding to biff a book. Is there some set scale of values? The number of times someone got it out in the last twenty years versus its rarity and cultural value. Silly boy. Whose cultural value? What cultural value?

I carried my trophies away proudly. And as I slid out the doors I noticed a big sign up saying HAWKE’S BAY AUTHORS. I nervously checked for my own name. I noted some authors who had less links to the region were there. My name wasn’t there. I was half way to eradication myself.