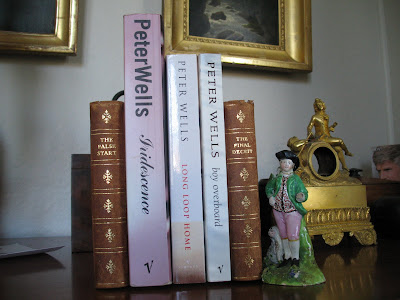 When I first thought of the idea of a blog, I was shocked to discover all the other Peter Wells’s in the world. Not that I should have been. Both Peter and Wells are relatively common names. (Peter especially in the post-war period. My class at school was full of Johns, Peters, Davids. ) And it’s not like I thought I would be the only ‘noteable’ PW. It was just that there turned out to be much more famous Peter Wells’s than me. And in this strangely associative yet jostling world of the web, it matters.

There’s PW the New Yorker whose every whim on food and restaurants is listened to with awe. There’s PW the Australian rock musician who, although dead, continues to have a presence on the web.

I had trouble getting elbow room.

It gave me a strange sort of greyness of feeling, as if I was a colour photograph slowly fading away to black and white. And then that definition dimmed till my features grew indistinct. It was as if my personality - my identity - was under assault.

I’d always wanted to smuggle my highy individual middle name - Northe - into my identity. But I had left my run too late. My publisher wouldn’t be happy now if I suddenly perked up with a new identity. It would lead to buyer confusion.

Not that Wells is an ideal name for an author. You’re always on the very bottom of the shelf. Way below people’s knees. More like, at their ankles. This means more than it sounds. It affects sales. Nobody is likely to be looking at books on the floor. But a good surname with a middle-range alphabet - that’s where Northe (my mother’s maiden name) comes in. This would put me at eye-level on the shelf. Spatially, I would come into existence. I would be seen. Peter Northe Wells would also be a unique name, having a sort of isoteric literary quality hinting at unusual origins. (Think Ivy Compton Burnett.) I could start a new career. Become a crime writer or start that highly successful romantic novel about a newly discovered Boleyn sister called Ada.

But what really interests me here is how disturbing I found this slippage, this possible loss of identity. It’s absurd on one level. I had been Peter Wells for over fifty years. I had wrestled with people on the phone who always seemed to plump for ‘Willis’ or ‘Wills’ (the New Zild accunt?). I had stood in a queue as a young man and felt the dread when my name was called in a military call up. I had become accustomed to sitting on stages in front of an audience and having that peculiar sense of alienation - a feeling that someone else was being talked about - when my name was mentioned in an introduction. (Always a moment of identity crisis. When you feel most like an impersonator of yourself.)

But at night, that time when things unloosen in the subconscious, I became most troubled about those other thieving Peter Wells’s. They were after my very essence. If we were all in a subway car and the name was called out, who would stand up? Who would fight to be the definitive Peter Wells? Which of us would have to slink out the door, like unsuccessful contestants in America’s Top Model - the ones who have to pack their bags immediately, confess tearfully to the camera that they do have something the world really needs to know about - then vanish into perpetual obscurity.

That’s what really worried me. I was being introduced to the uncomfortable notion of losing my passport in a foreign land and fading away into facelessness. I had often had the daydream - amounting to a nightmare - of how I would fare if I was like those people in the 1930s who had to flee their country then try and reestablish themselves in an entirely new environment, where all their old credentials and possessions were invisible. Where all you could rely on was your surface, or your ability to dissemble and hustle. I didn’t like the idea. I had the sense I might end up on the bottom of the heap.

My past couldn’t save me.

So I still find these other more famous Peter Wells’s faintly troubling every time I go to this blog. I eye them anxiously, wondering if they will try and annex and nullify me. Or whether, in a happier circumstance, someone seeking Peter Wells - the man who gives definitive tips on where to eat in Manhattan  -strays onto this site. I guess this is the upside.

But in a strange way I anticipate being at a passport barrier, somewhere deeply paranoid like the US - and as I move forward there is my doppelganger - someone ironically who looks nothing like me - but someone who confidently claims my name. And I’m seized by those passport Nazis who convey me to an office, turn on a light...and ask me: why did you think you could use this name?

Labels: All the Peter Wells's in the world....