The Biggest Erection in the Graveyard 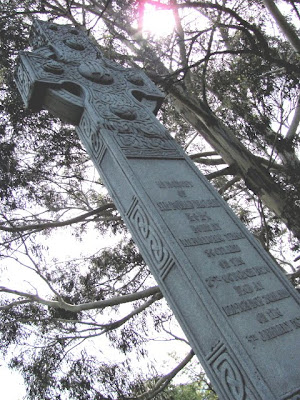 I was shocked today when I was in the Napier Hill cemetery to realise that Jane Williams is buried just along from her old enemy, the fallen missionary William Colenso. She was a bishop’s wife who thought Colenso presumptuous to think of marrying her neice, Marianne. She saw Colenso as a lowly mechanic.

Ironically her neice went on to marry a surgeon, a Mr Davis who himself was accused of adultery with a Maori woman. Davis’s sister bore an illegitimate child to Maori man by the name of Toa. This is all mid nineteenth century NZ. (In short, everyone was at it, or almost everyone.)

But at the stage Jane wrote to her friend about how shocked she was at Colenso’s cheek, she was in hoity-toity heaven, looking down a long telescope to the insect Colensois.

Strange to see her buried just along the aisle from a man she so despiced. She’s buried with all the other Williams - quite a few Anglican bishops - massed like battleships in an ocean formation - but seemingly neglected, the face of the graves mossy and damp and without any sign of a flower or recent attentions.

By contrast, their old adversary enjoys a sunny place and his grave generally looks well tended: more so, it is brightly lit and, ironically, Rinso-white.

The Williams became an aristocracy of sorts in New Zealand but now suffer a malodorous name. The irony is contemporary people are infinitely forgiving and even interested in sexual pecadilloes of the sort that ruined Colenso in his own life time: but crimes against indigenous people rank as a supreme sin in the contemporary moral order.

The Williams became seen as ‘land grabbers’ (regardless of the truth) in popular postcolonial imagination. The same is true of Sir Donald Mclean, Native Minister. His truly monumental grave sits ignored in the Napier Hill cemetery. (The biggest erection in the cemetery, I call it.) When we did our recent tour of fifteen interesting graves in the cemetery he was left out. This was by common consent. So there is something melancholy about Maclean’s immense Celtic cross, rising into the sky like a skyscraper vacated by people. It appears a monument to vanity.

But my shock was real, almost physical, sighting Jane William’s grave. I had just been reading her waspish, lively remarks that day. I seemed to carry a sense of voltage from a living person. But there she lay, seemingly forgotten.

In death, Colenso and Jane Williams, nearby neighbours, seem equals.