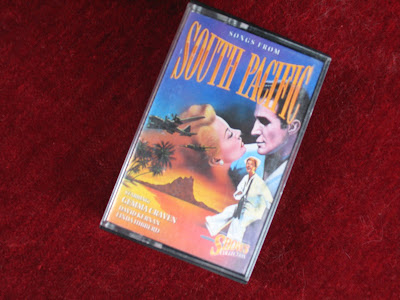 I knew the journey would be long and we were in a rattling old van. There was no sound sytem apart from an old tape deck. Ninety minutes later we stopped n Taupo and I said to Douglas we should choose two tapes each from a charity shop. Sure enough, there they were, down the back, past the old pillows and discoloured linen. They seem so antiquated now. There was a penciled sign -‘50c’.

The range wasn’t that great. Taupo is a place old people retire to and come to die. It’s a great place to get good quality dressing gowns. As for music....well, in a noisy van, you can’t go for finesse. Sing-along songs are best - things that can be heard over the roar of the motor. It’s kind of like karaoke, without anyone seeing you make a fool of yourself.

Douglas quickly chose a Rod Stewart tape. I chose Caruso - then hesitated over Neil Diamond. Douglas lost interest so I also selected South Pacific on a hunch I’d quite enjoy re-hearing the songs of my childhood. At 50 cents a toss I got greedy. I also picked up Elgar’s Cello Concerto.

When I checked what was on the Rod Stewart tape I quietly left it behind.

The Neil Diamond never made the cut. In the van, his highly orchestrated, emotion-drenched songs sounded too heavily-laden. Besides I’d never listened to him or liked him. But I was astonished at the visceral recall his songs created. Somehow I was back in my body and I was about 23. I was sunbathing at the beach, with quite a strong-smelling suntan lotion on. This was in the time when we all baked quite unconsciously for hours. I was lying on my stomach, my head resting on my crossed arms. I had my eyes closed. And from a holiday house somewhere quite close this bumptious, overly optimistic, promiscuous music played. I didn’t mind it but I didn’t like it. It seemed part of somebody else’s life, not mine. It still did. After a few songs, I took it out.

South Pacific was different. For anyone born in the 1950s the LP of South Pacific was an ikon. It was in everybody’s parent’s radiogram, along with My Fair Lady. The LP was a big shiny square, a picture of Mitzi Gaynor the actress in cute little shorts sitting beside the handsome and saturnine Brazzi. Her hair is still wet from singing “I’m Going to Wash That Man Right Out of My Hair’ but she’s already stiffening for the clinch with Brazzi -  raising her face to him so she can feel the heat of his lips as he bends down to kiss her.

The shininess and extreme colour of the LP cover evoked American power. This is when America was unchallenged and very self satisfied. And the music, syrupy, lush and evocative, took me back to a kind of willed belief, a happy eclipse of self. But it also reminded me of all sorts of sexual tensions in myself - even as I sang along now, as a vanished child. I can still recall the kind of instability in my attractions, in positioning who I actually was as I listened to each song and imagined myself, song by song, in a new persona, even a new gender.

At times I was as pert as Mitzi Gaynor, the ingenu American - I was corny as Kansas in August/normal as blue-berry pie. I too thrilled to the erotic attraction of Brazzi who played a worldy wise older European man. But then I was in love with him too. Even as I got older I longed for a worldy wise older man to scoop me up in his arms and make love to me. Teach me how things were erotically, as much as philosophically. Brazzi’s deep voice thrilled me as a child and I loved his blue-grey hair. But then I also felt deeply attracted to the muscular sailors, half naked  - some of them in primitive drag - as they boomed out their hymn to women - ‘There Aint Nothing Like a Dame!’.

Maybe the fact the actors could camp it up meant they put special energy into this number. Regardless, there was a definite frisson for a little gay boy, seeing all these men locked on an island without women, emoting about how they desperately needed relief.  Without knowing what it meant, I knew something was up and it mystified me and excited me. But I also probably wept a little over the doomed love affair between the handsome young American and the beautiful Polynesian woman. This was real love. Real Romance because it was tragic. (Thanks Rodgers & Hammerstein, you really fucked me up.)

I would have been eight or nine at this time, very romantic and unconscious about the meaning or power of sex. But during the film - and reliving the film through listening to the LP again and again and again, I relived this shuttle of attraction from feminine to masculine to ultra-masculine/drag, all the time positioning myself differently - flexibly, I suppose you would say. But hearing the songs now, so many decades later, I was amazed how I still knew the words. They seemed to be lifted out of my soul, line by line, as if there was a fishing line dangling back into my past. I relived the drenched romantic belief of it all, at the same time secretly scoffing at it to myself. Or was I?

I recalled how my brother when he was dying of HIVAids got the VHS out of a video shop and forced me and my mother, whose sanity at that time was very tenuous, to watch the film. When he went out of the room, rushing off to the toilet, I fastforwarded through what seemed an achingly slow operatic and leaden film. (He didn’t notice.)

Was he trying to search down that same path that I was? Sitting in the van, rushing through landscape.  Was it all true? The phenonemum of falling in love is a real enough experience. God knows, I know. Or was it here we learned all the lies? The lies about love, about romance, about finding some enchanted stranger....across a crowded room. Because they were lies. They were scented, cheap, stupid lies. (Beautiful lies). Life wasn’t like that. If you were gay, it was particularly stupid to believe in this kind of romance. It was dangerous. Your life wasn’t like that. It was more complicated. The choices were different. This kind of dewy romance set you up for a particularly harsh fall.

But then I was suddenly struck by the fact I actually did meet the man who was driving the van... years ago now.....I did meet his gaze across a crowded room. Just like in the song. It was some enchanted evening. That made me think.

It’s just that, well, that meeting of the eyes was the beginning - whereas romance always posits this as being the end. Or as it is written in the movies THE END. It’s when the curtains swish close and the audience rises to its feet and dusts itself down and goes off out into the daylight or night, returning to the small intricacies, intimacies and little murders of daily life. So one enchanted evening is the departure point rather than the arrival. Because falling in love isn’t the end at all, it’s only the beginning.

Labels: The dangers of romance