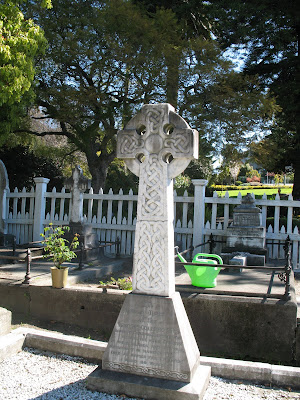 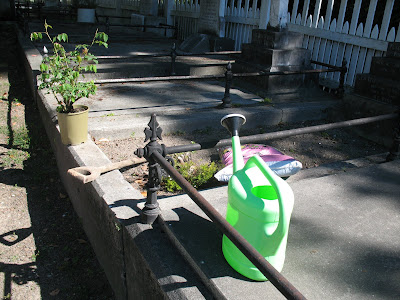 In a moment of inspiration, closely allied to a form of madness, I bought a climbing rose to plant near the grave of William Colenso. (His tombstone is a Celtic cross - he was Cornish.) I have this urge to be physically close to him at the moment, or traces of him while I am researching his life. This probably makes me a wierd kind of grave-hugger? Or some sort of wierdo that hangs out by the dead.

The only thing is....I don't think of him being dead. Because I am reading his letters, journals and writings at the moment, I feel he is like this cloud of combustible matter. Lively. A kind of swarm of thoughts....

His grave is right inside the gates of the Napier Hill cemetery - a 'good address'. He is surrounded by generals and bishops - people who thought they were much more important than him. Yet his grave is a more visited site. In the past the graveyard was full of old roses. But the graveyard became looked after by a group of volunteers. Now they're old men. They're nice kind of blokes, genial. You come across them sitting on a grave, having their lunch.

But I suspect their idea of a 'garden of the dead' is like a suburban front lawn - with nothing higher than an ankle. The roses were all killed and prickly evergreens planted - the sort that you saw a lot of in the 1970s. They're called 'labour saving'. They're also ugly.

The idea is the rose will grow along the graves immediately behind William's and form a soft green blaze of colour when in leaf. The roses are pale white with the faintest touch of pink and are scented. The rose is called Madame Alfred Carriere and is a noisette (not sure what the implications are of this) and dates from the 1880s. In other words it is a rose from the time when William was still alive.

I went along yesterday and planted it, surreptituously. Since it eventually grows to six metres and is a sprawling thornless rose, it should look good.

Of course if I was being really true to the spirit of William Colenso the rose would be so completely covered in thorns it would be hard to touch. He was a thorny difficult bastard. Who also sent out some beautiful flowers.

Then I suddenly remembered that Colenso was mad on botany and was one of the great namers of NZ plants. He would surely like some isoteric NZ fern or plant. He used to go into swoons at seeing some tiny little fern never seen before by a European. When he was washed up on an isolated beach, the only white man there, the ship sailed on. He was left behind. Cold and desperate. In this dark night of the soul, he suddenly found a fern he had never seen before. And immediately he felt better. He felt he was doing something right. He met Darwin when he sailed through New Zealand in 1835 and it changed his life. Many of his specimens are kept at Kew Gardens, the sort of ultimate plant museum. He was made a member of the Royal Society on the basis of his botanical genius.

I wondered what he would think of a somewhat demented gay man planting a rose nearby.

I decided in the end he would probably like it. Anyone would, more than one hundred years after their death. It’s called longevity.