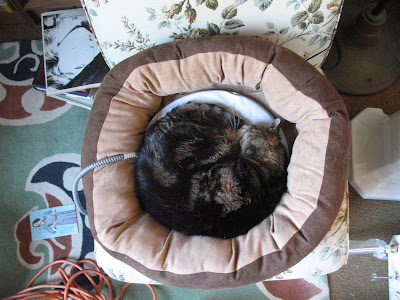 Mischka the cat is eighteen years old and near the end of her life. She sleeps most of the day in what Douglas, my partner, calls her ‘crockpot’. This is a small electric blanket. I bought this when I was in Sydney. When this bitter and long winter started I was working in my study. I heard heart rending aninmal cries in the corridor. They were gutteral, anguished. I ran out, thinking it was a cat fight. But it was the ancient Mischka registering her outrage, her fury, that she had lived into another winter and it was causing her pain.

In Sydney I was walking by a pet shop in a chic inner city suburb - a place where  a lot of single people live. There was an ad for pet electric blankets. Even though my restrained 1950s upbringing was screaming: don’t be so indulgent! For an animal! I brazenly went in, paid my $99.99 for the Made in China item. All my friends rocked with laughter. I blushed.

But when I got home Mischka wasn’t interested in her electric blanket. It took three long weeks to coach her to sit in it. (It is ugly. I don’t fault her esthetic judgement.) But then she took to it. And spends a lot of time there.

We popped it in the spare room. This is because poor old M smells. She’s a shocker. She has also reached the stage of dribbling a lot and her fur has started to be cemented with spittal. Her eyes also have an inner lid appearing over them. Her talons are long. You ask me - repulsed - why isn’t she ‘put to sleep’?

Well, she has almost died several times already. She had a tumour on a nerve removed last year which sent her into fits. I suppose she is still alive because she has a fiesty indominatable spirit. She is also a sweet loyal cat who has served us well.

We have three cats - through joining our two households together a few years back - and M is always first to the biscuit tray. In the morning she hobbles along the back corridor on imaginary crutches, rushing along. But it’s more than a purely animal need for food. She’s still blindly affectionate.

This is a small porttait of Mischka the cat. I chose her when I went along with Douglas who had shifted into his own house and wanted a cat. We had just begun our relationship. At the SPCA - in what is a nightmarish audition scene - Mischka ran to the front of the cage, presenting basically a kind of Cat Idol performance of sweetness and affection. ‘Take me!’ she all but inaudibly cried. She was a pretty little tabby, small. She was speyed of course, so that wasn’t a problem.

It was only as we took her home she revealed her skin-curdling ability to yowl. It’s a coarse high lament, nerve-tingling. We were told she came from the Western suburbs of Auckland so her first informal name was ‘Westy Scrag’. (She came with the name of Mischka.) She was a affectionate cat - always eager to nestle on a knee or have cuddles.

But in the first mating season D’s house became surrounded by yowling toms. Mischka was in a frenzy. D rang the SPCA: they said it was a sort of phantom heat which sometimes happens. A certain amount of time later, in D’s wardrobe, Mischka had four kittens. Douglas kept one - a male - and his sister took another. A friend took a third. The fourth was dead on birth.

So Westy Scrag had a son. He developed very quickly into a huge black and white tom - he was big from the start, just as she was dainty. I wanted to call him Rooter but D’s mother was horrified by this vulgarism and he became Buster.

Buster and Mischka shifted with D to Napier several years back. When I finally shifted in with him I brought my own cat, a long haired female of high temperament - a stray I called, for obvious reasons, Flounce. (This business of naming cats is important.)

The three cats gradually worked out a way of being. They would spat, especially Buster the male and Flounce the Queen. But when we came back from being away, the three would be sleeping closely together, arranged like the figures on a clock.

Now Mischka is clearly nearing death the other two cats treat her with grudging respect. They keep out of her way, allow her egress. It may be simply that they find her smell offensive - or worse, a warning. Mischka comes in and sleeps by the fire. D or I lift her up and put her in her crockpot for the night. When I did this last night I could feel the hurry of her heart. I wondered whether she was rehearsing her panic for when we took her down the road to the vet.

By now her name had changed into ‘Potato Crisp’ - because she is so wafer thin and light when you pick her up.

Another name is starker. It is simply: the Old One

Does she know? I don’t think so. But these are definitely last days. The big question of ‘when’ lies in the air. It’s palpable, visible. A painful decision for any companion of a loyal animal.

Labels: The Old One - the ninth life of a cat.