sombre indifference and a talking book 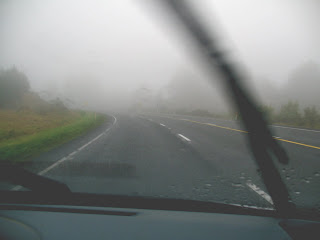 I live in a geographically isolated place, Napier. It takes five hours driving to reach Auckland, the city in which I grew up. When I was a kid we used to come down and visit my grandmother in Napier. There was one part of the road which was notorious. This was the Napier-Taupo road. It starts off being very flat then you enter a series of corrugations where the hills become increasingly moutainous, until you lose cellphone contact and there are no houses. It is very beautiful. Strangely beautiful.

When Anna Kavan drove down to Napier

oad would have been a narrow thread of pumice and gravel - treacherous to drive on, terrifying. “...it seems impossible for a poor human device, liable to breakdowns and in constant need of refuelling, such as a car, ever to make its way over the (hills),' she wrote. '....It is a region of solitude, sombre indifference, silence and grandeur. It was a place of human-life negation. It was nature at its most remotest, most formidable, and most magnificent.” 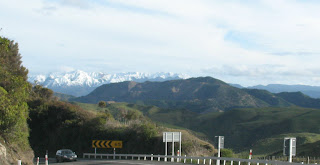 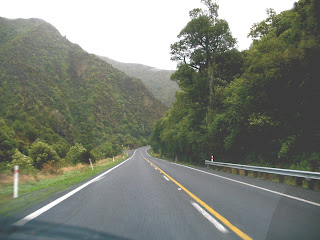 When friends in Auckland, in the city, say to me, ‘how are you finding it down there?’ they mean: how can you bear it? A cityborn boy who likes all the things to do with cities - crowds, cafes, books, anonymity. Well, this road is one of the things I have ‘found’ down here. It does things for me. I find travelling it soothing, almost savagely soothing.

When I came back from visiting Berlin and Vienna last European summer it was late afternoon when I got onto the Napier Taupo Road. It was sunny - the long shadows of winter - and the magnificence of the architecture of the hills, each side receiving a lamination of light, the ancient trees standing upright and seemingly picked out in gold, was as remarkable as anything I saw in Europe. As uplifting as the greatest cathedral.

But it’s the depth of the solitude, driving. In contemporary life we hardly ever have continuous unbroken time alone. But I have a confession. I listen to talking books.

I’ve made the mistake of saying to writer-friends, ‘Oh I’ve been reading so and so’ in a voice of enthusiasm. Then I have to backtrack and say, with considerable embarassment, ‘well, I’ve been listening to...’ The literary world is intensely snobbish. It’s like the Chinese court towards the end of the Manchu dynasty: vast change is coming, has already arrived but that only makes the maintenance of old forms more important.

But the fact is I have ‘heard’ more novels driving than I have had time to read. At the moment I am ‘reading’ Andrea Levy’s Small Island which I absolutely love.

Let’s face it, most of us started off as readers by being read to. There’s nothing more lovely. And these talking books often have superb actors. The combination of driving through magnificent landscape, in solitude, accompanied by a complete other world - aural, narrative - is fantastic. It’s the caviare of life. I feel lucky.

Sometimes I make sandwiches so I can just keep on driving. 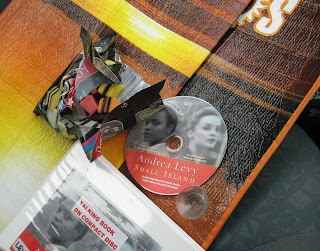 One trip I got in the car in Auckland and started listening to a Michael Cunningham talking book A Home at the end of the World (read by the actors from the less successful film, including Colin Farrell with his amazingly sexy gravelly voice, plaintive as a prairie). I got out in Napier it felt like, two minutes later. I had been listening so intensely.

But this can have untoward side effects.

On my way back here last time, I was enjoying Small Island so much I glanced at the amount of petrol in the car as I left Taupo. I should explain there are no gas stations for the followng 135 kilometres of increasingly mountainous territory. The tank was quarter full. That seemed ok. It’s often enough. So I took off.

It is wintery now. We were about to head into an intensely cold patch, when winds from Antartica would dump snow all over the hills. As it was, there was low cloud in all the valleys - very beautiful. The landscape felt drenched in some spiritual aura.

I was climbing the last of the huge hills when my petrol guage came on. ‘Empty’.

I wasn’t sure how empty this was, but it caused me to feel acutely uncomfortable. It was getting towards dusk, a low cold chill spreading over the landscape.

I decided to go into neutral and coast down the other side of the hill. I knew once I got on the downside it was basically a series of declines before reaching Napier. But there was quite a long way to go.

Occasionally a car would zoom up behind me and I would have to go into gear, speed up or pull over, then engage the car again and get up speed so I could coast along.

I kept listening to Andrea Levy’s story. It was my good luck totem.

I began to pass the odd farm-house. Then I climbed another hill. The petrol warning light came on again, fading away for a time, then blooming out in the increasing darkness.

I decided to turn the talking book off. I was starting to not listen to it carefully. I needed to concentrate on my ‘worry’ - devote a bit of time to it, by way of allaying it.

I thought of a strange story.

I remembered as a child we had been travelling down to Napier. It was winter and the weather was bad. There was a wash-out on the road. An entire hillside had crashed across the road. There was a narrow track made for a single car to get across.

Mum, my brother and I decided we would walk across the track. I took my teddy - the teddy which embarassed my father because I kept him as a companion so late (I was probably nine, ten years old.)

We left Dad to either drive across or slide down the hill, probably to his death. Now it seemed remarkable the way we all decided, as a family, that Dad would drive the car alone.

I wondered now how Dad felt as he drove along the narrow track.

At the time we didn’t think about him. Or I didn’t.

I reflected on the strange decisions of the time.

Anyway, long story short, I began to drift down into the Eskdale Valley which takes you towards Napier.

As it was I got to a petrol station.

But it was a warning: talking books can be bewitching. Or: imagination untrammeled, which takes no notice of reality, is foolhardy.