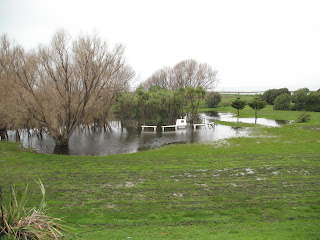 The other day I drove by the place where the missionary William Colenso lived.

There’s a small rather ugly historical marker on the site, from the 1980s. It’s made of concrete and looks like it should mark where a bridge once was. Something utilitarian. Rather than the shattered hopes and dreams of a man who hoped to gather Maori into christianity, only to fall from grace himself. He had an illegitimate son with his Maori servant. His family deserted him, he was sacked from the church and ultimately, the mission house burnt down.

It’s the site of a tragedy then.

But this day, as I sped past, I glanced down at it as I always do. I’m kind of checking it out. It’s not that I expect to see anything. It’s just like you rub a secret spot. Good luck.

I want to write a book of essays on Colenso. He’s a fascinating, contradictory, passionate man. A wonderful letter writer. He’s buried just along the road from where I sit writing. His bones lie not too far from the bones of my NZ ancestors. His house is just down the road - a saunter away. You could say, invisibly, he surrounds me as I sit here. My job is to make him visible - palpable. Real.

That day as I sped by the memorial was surrounded by water. It was a beautiful still afternoon, freezing cold. But the light was beautiful. Tinged with a cold sunset.

I thought again how hopeless the site was for a mission house.

It was preordained for failure.

But in a way I was pleased to see history living on. It was still hopeless. A Maori chief said at the time ‘only eels ever lived there’. Colenso was given the piece of land because nobody wanted it. How the locals must have smiled among themselves, seeing the missionaries trying to cope with something so utterly hopeless. The fact it took slightly less than ten years for disaster to strike is testament to William and his wife, Elizabeth’s pluck. Or madness.

So as I sped by - and see nothing remaining of their mission - only that ugly monument still surrounded by rain and river water - I sort of salute human frailty. I also think of the book that I hope to write.

I try and gather an impulse from the site, urging me on.