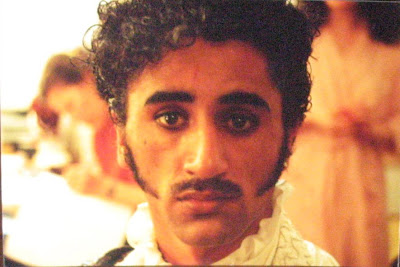 I’m not sure if anyone can claim to ‘discover’ an actor. There’s all the hidden work which goes on before an actor breaks through to public notice. But in 1992 fellow director Stewart Main and I were looking for a Maori actor to play the role of a louche, wicked, sexy character in the period melodrama we had written.

The film was called Desperate Remedies.

The character is irresistible to women and men. He’s wildly charming and charismatic. He’s also drug addicted, a sleazeball - a manipulator. In short, an incredible part to play.

Our problem was finding an actor. Drama schools were not so highly developed in the early 1990s. There were older Maori male actors like Wi Kuki  Kaa who had appeared in Barry Barclay’s film, Ngati. Zac Wallace had been a  menacing character in Utu. But Stewart and my idea of the character was edgier sexually. He was younger, sexually potent. He had to be blatantly attractive.

He also had to be Maori - he operated as a kind of sexual ‘other’ to the white characters, a kind of forbidden love - as indeed Maori were to white women and men in the later part of the nineteenth century. The film was set in New Zealand in the 1860s.

Stewart did most of the casting work for this character. We settled on a good Wellington actor. But one afternoon, Fraser - the character’s name in the film - walked along our veranda. This actor was wildly charming and charismatic. (I don’t know if he was playing the role or being himself, an actor on the hunt of a job. All actors are whores when there’s a scent of a job.) This actor was a young Cliff Curtis.

Even before he left, Stewart and I knew - by an exchange of glances -  by a kind of rising excitement in our gullets - we had found our Fraser. The problem became switching actors, a painful, difficult situation. But it was incontestable, unarguable. And I think on viewing the film again recently (after not seeing it for many years) we did the right thing. Cliff gives a brilliant performance. He eats up the screen from the moment he comes on. He lives vividly. And I think I’m right when I say he was never more beautiful.

You can probably rely on a gay director to make a male actor look his best.

But there was a lean hunger in Cliff’s performance which is very....appetising.

On set he was always a contrast to the other actors (who were more classically trained.) Cliff, if he was entering the scene angry or in some heightened state, would rage about the ‘studio’, seething, mouthing words, building up his adrenalin. It meant when he walked into a scene, he was mid-emotion. He palpitated. He sweated. He glitters on celluloid still.

Many years later I heard there was a rumour he offered sex to Stewart and me for the part. And we of course accepted. The strange thing is - maybe even the disappointing thing is - this never happened.

He won the part on sheer charisma.

It became his breakthrough moment. After that, he was in Once Were Warriors, directed by Lee Tamihori.  And from there he became a kind of trans-Pacific actor, appearing in a number of big American films.

When I was at Waikato University a few years back I was startled when a student said prosaically his role in Desperate Remedies was ‘racist’. I was speechless for a moment. Then I said: it was the role of a life time. Characters who are ‘bad’ offer probably more potential for an actor than any other kind of character. I was incredulous.

But when I thought about it later, I thought the student, applying a simplistic ruler to a complex dramatic art form, didn’t understand that in melodrama, everyone is flawed in some way. Or should I say - everyone in life?